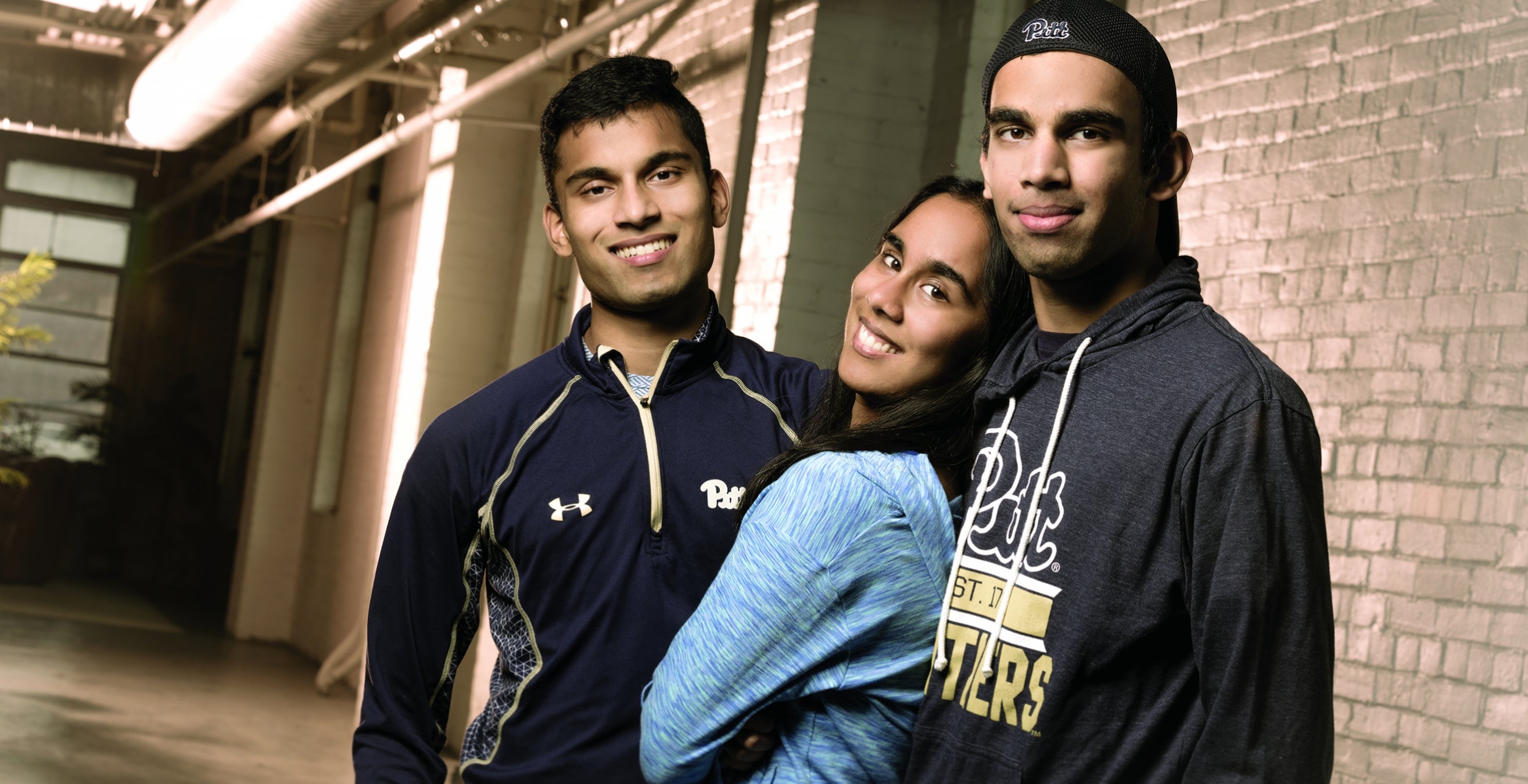 Pitt’s freshman class tops high expectations. This is “the most academically accomplished and heterogeneous class in Pitt’s history,” noted Chancellor Patrick Gallagher in an October 2016 report to the University’s trustees.

This year’s freshmen hail from nearly 1,400 high schools in 44 states and include 162 international students from 28 countries. The incoming class’s average academic GPA is 4.01.

“This class is also our most ethnically diverse in the University’s history,” said Gallagher, “with minority students making up nearly 30 percent of the Class of 2020.”

Here’s a glimpse at a few of Pitt’s newbie students, who are just beginning to forge their futures. Although most of these freshmen are still formulating their academic plans, they all express a desire to improve the world—and their interests range from biology and bioengineering to music, film studies, and Hispanic languages, to mathematics and economics, to health policy and the business of medicine.

Who knows where Year 1 will lead for the 4,035 freshmen in the Class of 2020? Their experiences, accomplishments, and careers-in-the-making are early works in progress.

Background: From South Brunswick, N.J., the Ravi triplets are motivated, curious, and accustomed to being busy—each in their own individual ways. All three are avid athletes (basketball, biking, running) and instrumentalists (trombone, upright bass, and cello). The brothers have even played at New York’s Carnegie Hall. Sanjay was the first of the three to choose Pitt, which influence his siblings to favor blue and gold.

Focus: Samhita and Sreyas are both interest in biology and bioengineering, potentially for careers in medicine; Sanjay plans to double major in economics and math.

Inspiration: Their parents. The three siblings say they cannot take full credit for their achievements in life. “A ton of our success is due to our parents’ accomplishments in instilling good values and getting us this far,” says Sreyas.

Aspiration: Samhita loves science and hopes to be involved in medical research while at Pitt. “I want to help people,” she says. Her brother Sreyas shares her enthusiasm for medical science, particularly orthopaedics. Sanjay, meanwhile, can see himself involved in financial investing—and he’s exploring his options with the joint math-economics major offered by the Dietrich School of arts and Sciences. 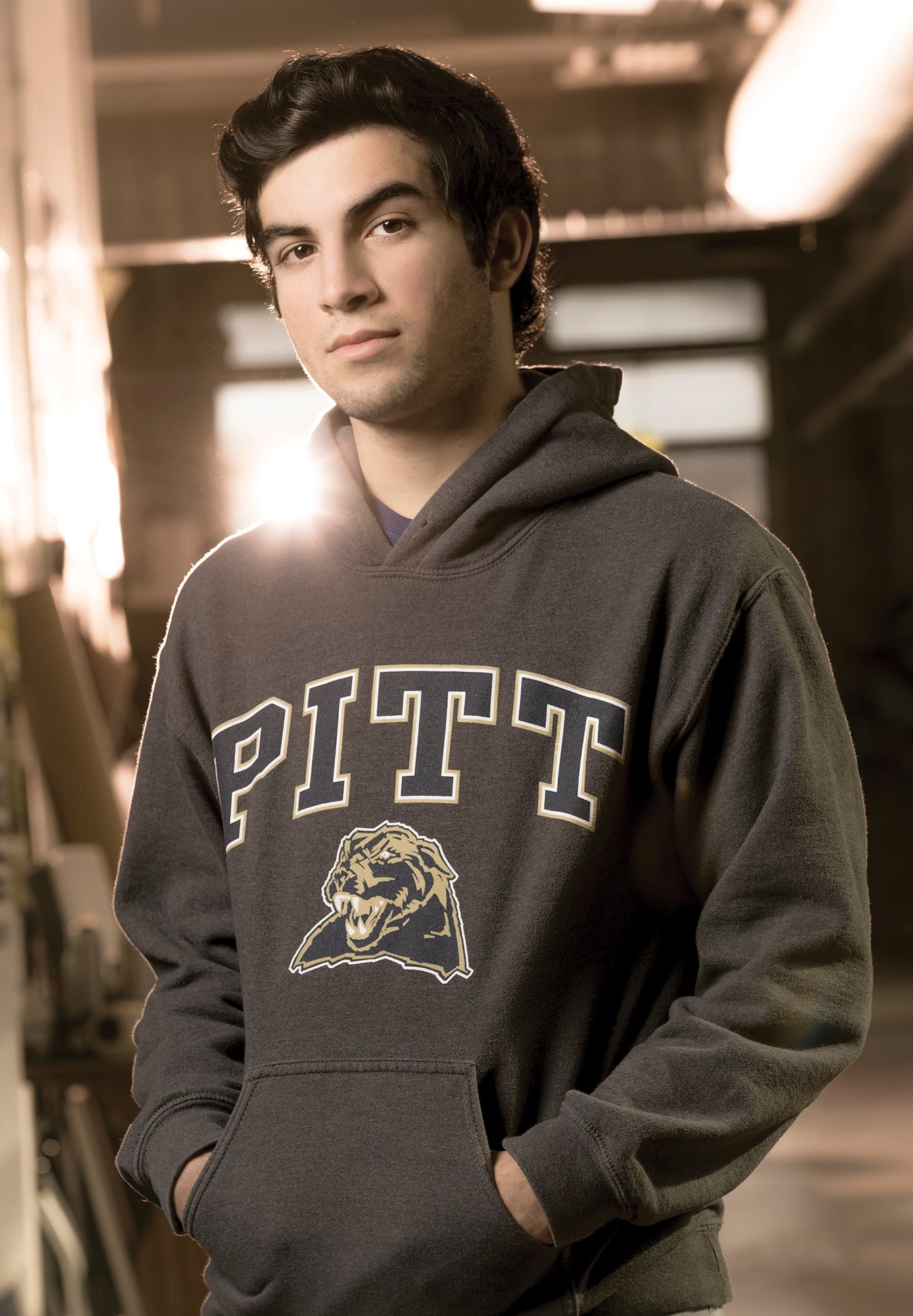 Background: From Southlake, Texas, a suburb of Dallas, this freshman enjoys sports and embraces a multicultural perspective. He reads Arabic and is fluent in Urdu, the language of his grandparents in Pakistan. He has traveled there many times to visit extended family, even though he remains, he says, an outsider with his American habits and customs.

Focus: An involved student who welcomes leadership roles, Kizilbash is passionate about economics and finance. “When I studied for econ tests in high school, it didn’t feel like studying,” he says. “I started investing in the stock market as an experiment—looking at the numbers, identifying trends, doing the research. It was all just fun.”

Inspiration: This quote from boxer Muhammad Ali, which is on a poster hanging in his residence-hall room: “I hated every minute of training, but I said, ‘Don’t quit. Suffer now, and live the rest of your life as a champion.’”

Aspiration: “I want to get into the business of medicine eventually,” he says, with the idea of perhaps opening his own practice. His parents are both science oriented, and his father is a cardiologist. IN the meantime, he’s thriving in his new life at Pitt. “Everyone here wants to help you. They want to be your friend. A diverse community really allows for more acceptance, I think.” 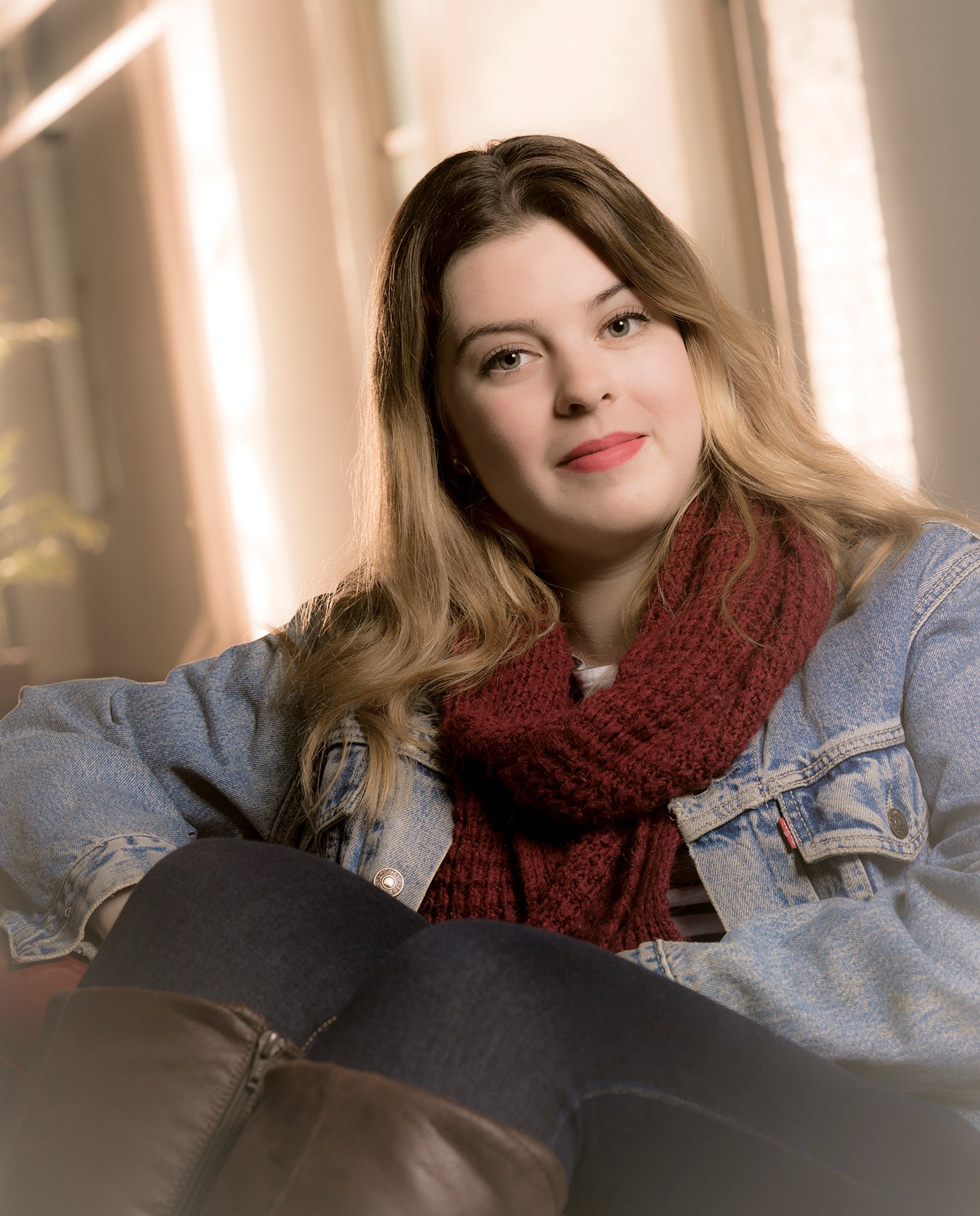 Background: A science whiz from Alexandria, Va., Driscoll sought an urban university with strength in the sciences and in Hispanic languages because she grew up speaking some Spanish thanks to the influence of her mother’s Cuban family. Now, she wants to master that bilingualism as she also pursues her interest in biological sciences. “All that came together at Pitt,” she says.

Focus: Ultimately, improved standards of global public health, guided by statistical and policy analysis. She already published an article on the human papillomavirus (HPV) vaccine debate in a student-run sciences magazine, and she’ll be participating in Pitt’s First Experiences in Research program in the spring semester, conducting research in public health.

Inspiration: Malala Yousafzai, the youngest-ever Nobel Peace Prize laureate, for her bravery and willingness to sacrifice for her ideals. Also Pride and Prejudice’s Elizabeth Bennet for her sense of humor and “strength to do things which society doesn’t expect of her.”

Aspiration: Driscoll hopes to work for the Centers for Disease Control and Prevention of the World Health Organization. “I’m really into the idea of ensuring we raise the standard of care for everyone by looking at policy and using a statistics perspective,” she says. Shorter term, she wants to study abroad in Argentina while earning a certificate in Latin American Studies. 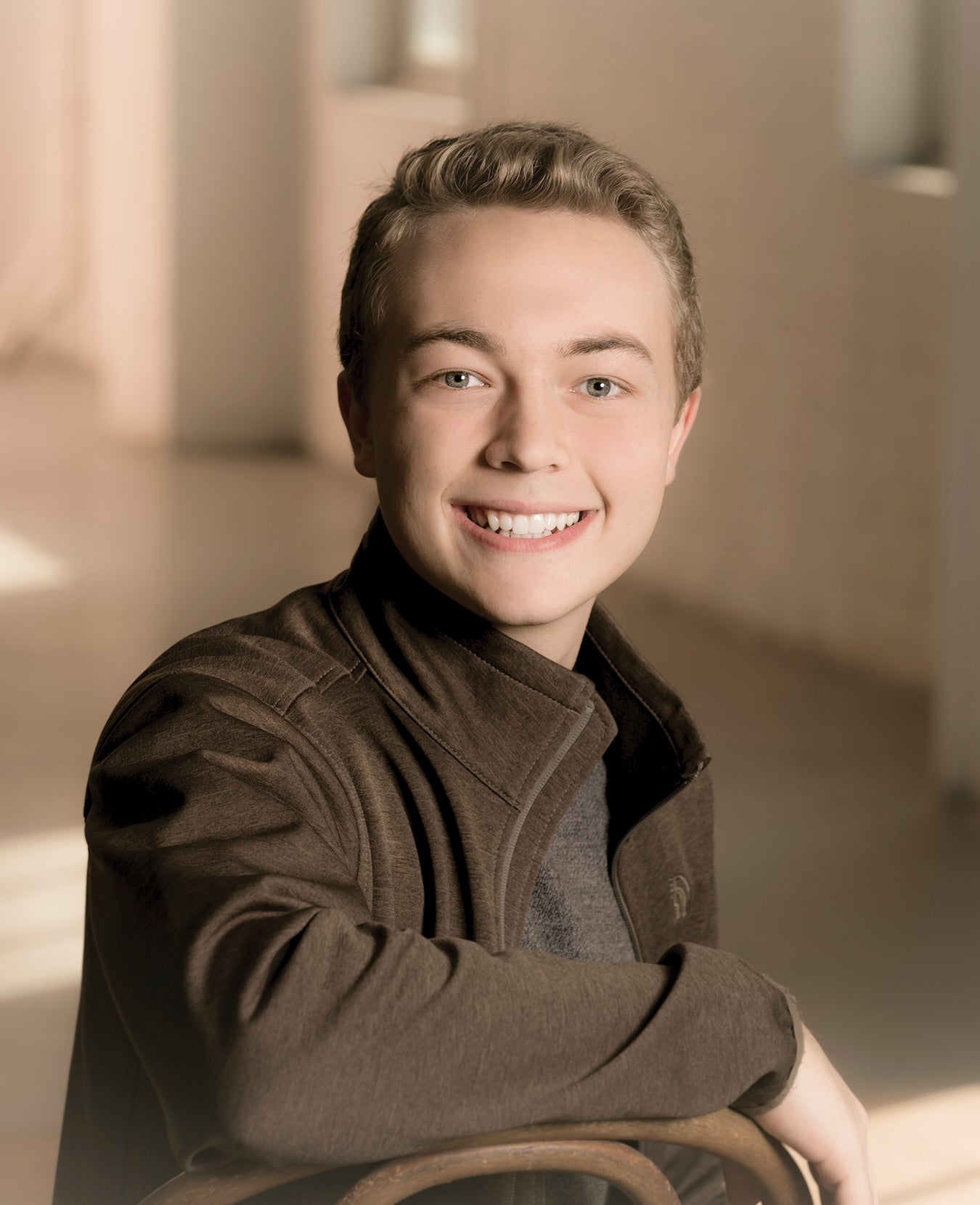 Background: Fullerton grew up in nearby Bethel Park, Pa., and already has family ties to Pitt—his sister, Sarah, is currently a senior on the Pittsburgh campus and helped inspire his Panther pride. While in high school, he balanced academics with a yen for performance. His acting and singing talents earned him a number of roles, including the title character in his school’s production of Peter Pan.

Focus: Biology with an interest in eventually pursuing dentistry. He’s also enjoying the course “Intro to Performance” and taking advantage of spare time to play pool at Nordy’s Place in the student union or catch a film at SouthSide Works.

Inspiration: Witnessing individuals working collectively to accomplish a communal goal. It’s something he saw a lot while doing theater, and it reminds him that almost anything can be accomplished if people work together.

Aspiration: Even though it wasn’t cool, he always liked going to the dentist as a kid. (Perhaps that’s why he was voted “Best Smile” in his high school yearbook.) “I’ve always enjoyed interacting with kids,” he adds. So, pediatric dentistry may be in his future. Meanwhile, he’d like to put his people skills to work as a resident assistant at Pitt in the future. 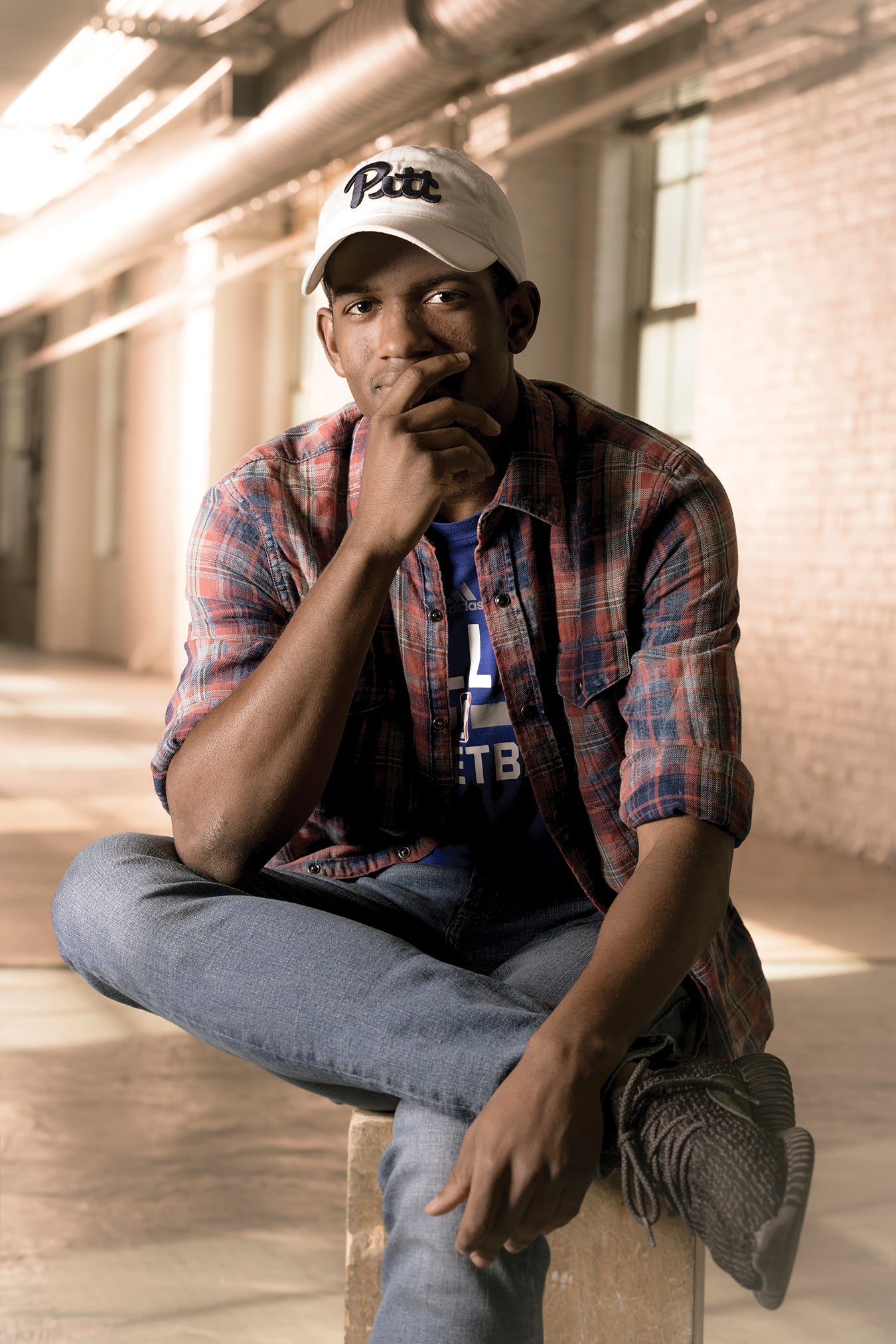 Background: A standout student and the president of his high school’s senior class, the Dallas, Texas, resident is also a bit of an adventurer. In August, he moved onto the Pittsburgh campus without previously visiting. “I’d never been to Pennsylvania, either,” he says, but a high school friend enrolled here, and Hubby also was influenced by a Pitt advocate at a college fair. “From the moment I stepped on campus, I’ve loved everything.”

Focus: The movie buff expects to dual-major in film studies and biology and minor in Portuguese. “My best friend from home is Brazilian, and I’ve always loved the language.”

Inspiration: Dr. Ben Carson. “Not the political side, but the medical side,” he says. “It’s amazing that he basically came from poverty and became one of the top neurosurgeons in the world. He broke through so many barriers.”

Aspiration: After a car accident damaged Hubby’s face during childhood, he marveled at how emergency doctors were able to rebuild his nose using a bone from his rib. The experience cinched his interest in becoming a doctor—someone who can help others in remarkable ways.