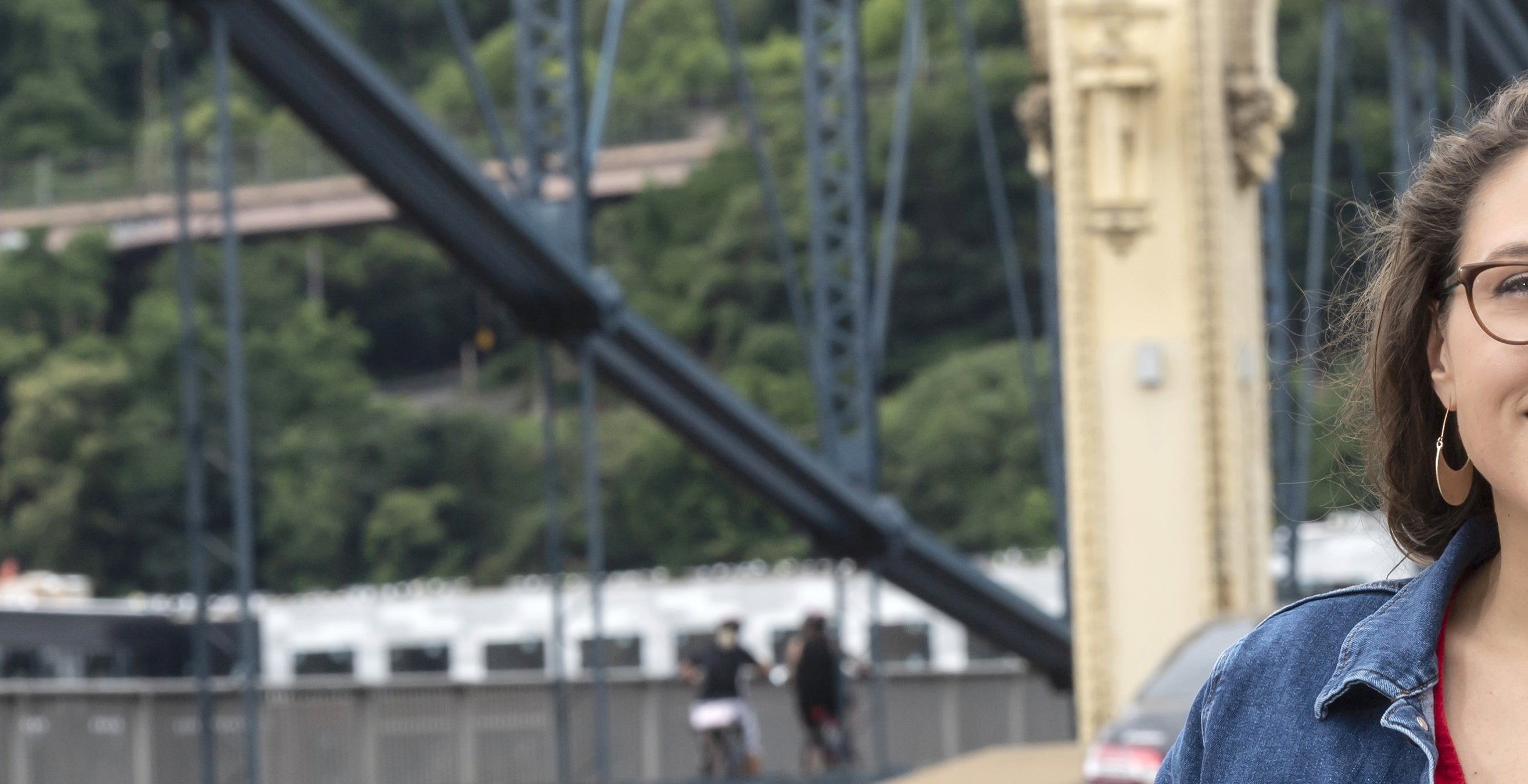 Had she made a different choice, Jenna Baron would be networking with other Ivy League students right now, finishing her master’s degree in social work at Columbia University.

All she had to do was accept Columbia’s offer.

But this afternoon, she isn’t in New York City; she’s in Crafton Heights, a neighborhood in far western Pittsburgh. It’s a rainy, damp day. As she stands on the sidewalk with the humidity fogging her tortoiseshell glasses, she peers across the street, searching for children who many Pittsburghers don’t notice.

Soon, she spots two familiar faces. “Kuja!” she shouts, a Swahili word for “Come!” The youngsters—Amani and Ruth—look both ways and, when it’s clear, scurry across the street. Baron (A&S ’15) greets the first arrivals with a hug, and they quickly seek shelter from the downpour by climbing into Baron’s parked car.

Except for the rain, this is part of Baron’s afternoon routine. After school is out, she meets Amani, Ruth, and several other children—all refugees and immigrants—and stays with them until their volunteer mentors arrive to drive the children to a nearby after-school program created by the Alliance for Refugee Youth Support and Education (ARYSE). Baron is executive director of ARYSE, a nonprofit she helped develop after tutoring refugee children as an undergraduate at the University of Pittsburgh.

Nine-year-old Amani, whose family was forced out of the Congo, has news for Baron. He tells her he has seen her on Facebook.

The little girl next to him, Ruth, is shy, unsure of her English. But when Baron gently asks her what’s new, she whispers that she turned 10 the day before.

“It was my birthday, too!” exclaims Baron. “Ruth, we’re birthday sisters!” 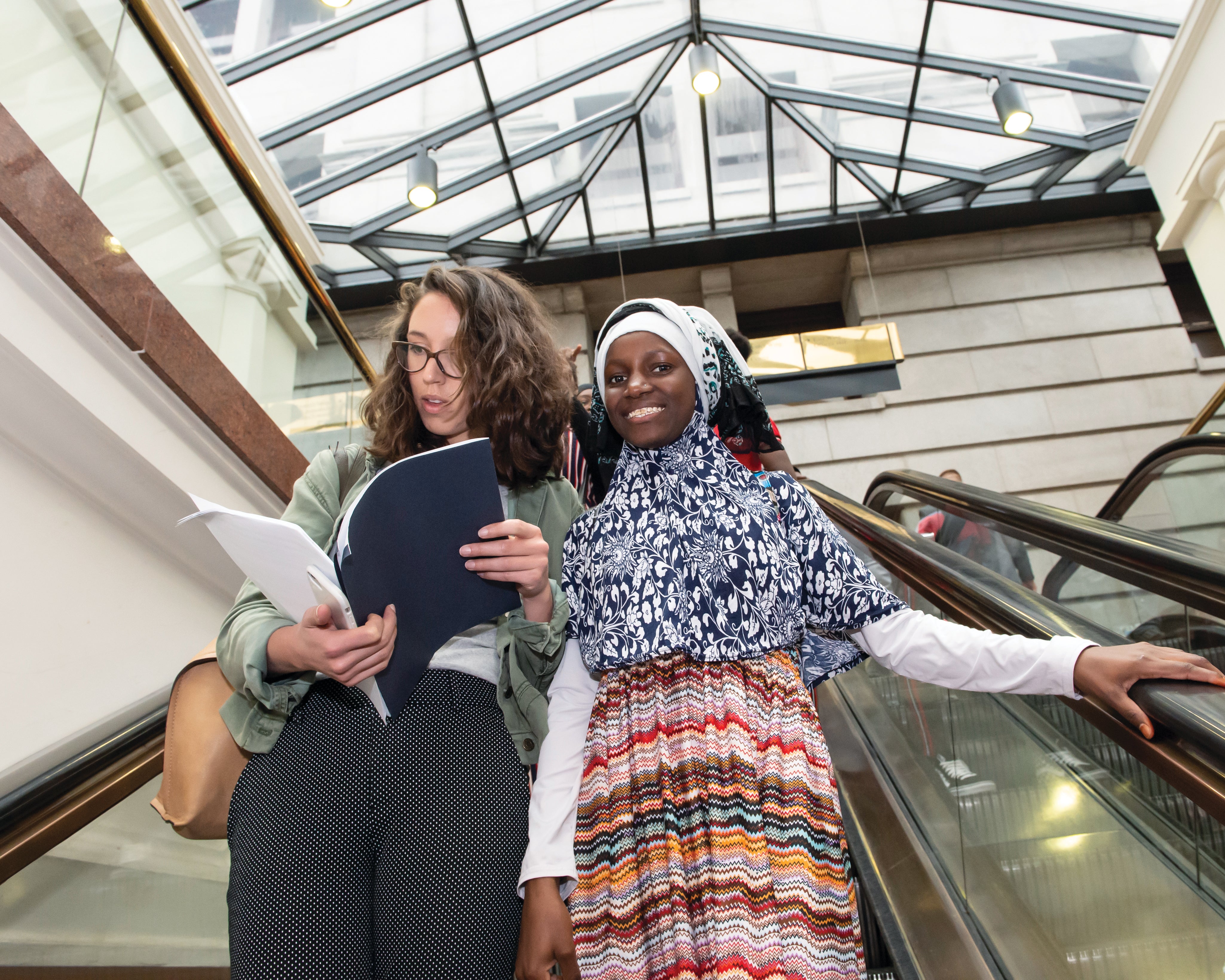 Grins weren’t always plentiful for Amani and Ruth. Imagine being driven out of your war-torn country as a child, living in a refugee camp for years, waiting for clearances that will one day allow you to legally resettle in the United States with the promise of a better life. Except, when that day comes, the promise seems broken.

As Baron puts it, “You have to take a crash course in a new environment. You aren’t from here. You don’t speak English. You watch your parents—people who are incredibly courageous—getting lost downtown because they don’t know enough English to catch a bus.”

When she visits schools on behalf of the program, she witnesses how the environment there can be difficult for the youngsters, too. “There’s a shyness about them. They aren’t outspoken. But when I see them together at our ARYSE programs, they’re rambunctious and creative. They’re real kids when they’re in a comfortable environment.”

In part, she is striving to accomplish that through the twice-a-week after-school program for refugee and immigrant students of all ages, held at two local sites—one for elementary and middle-school students, the other for high-schoolers.

“The after-school club is a safe and fun space for the boys and girls to receive homework help, tutoring, mentoring, and enrichment,” says Baron. In addition to the one-on-one support, the students take part in creative expression workshops and team-building activities.

In its sixth year, ARYSE’s programming now annually nurtures more than 100 youths who have come from Afghanistan, Brazil, Burma, Congo, Eritrea, Guatemala, Iraq, Kenya, Mexico, Nepal, Nigeria, Sierra Leone, Somalia, Syria, and Uzbekistan. As ARYSE’s executive director, on any given day during the school year, Baron takes a child to ballet class, talks to a school principal about a bullying incident, or maybe helps a parent who can’t translate an application to summer camp.

Before getting her first paycheck in April, she went two years without drawing a salary; instead, she used funding to pay her counselors while supporting herself with a part-time job as a policy associate at United Way.

“She did all this work for free for years,” marvels Wasi Mohamed (A&S ’17), former executive director of the Islamic Center of Pittsburgh, a partner in the after-school program, and a Pitt alumnus. “If that isn’t a testament to authenticity, I don’t know what is.”

Baron’s father, John, says he is extremely proud of his daughter. He worries, too, because of her benevolent career path. “But,” he says, “I was always confident that the Lord would provide. She has sacrificed everything. She is so pure in her intentions.”

Baron’s older sister, Kristina (BUS ’06), also admires what Jenna is trying to accomplish. On the surface, the sisters are a study in contrasts. Kristina is a senior manager working in ad technology, overlooking Manhattan from her 20th-floor office. Baron works out of a co-working space in East Liberty when she’s not driving all over Pittsburgh.

“I joke around that I’m working in an industry that puts mobile ads on people’s phones  and Jenna is basically saving the world,” Kristina says. “My world is very different from hers, but deep down we are very similar. Our parents taught us to be giving toward others and to be involved.”

The sisters grew up in Wilkes-Barre, Pa. Baron’s parents say she was never one to brag. When the straight-A student was named to the homecoming court her senior year, her mother, Chris, an elementary school guidance counselor, only found out through friends.

Not sure what studies she wanted to pursue in college, Baron decided to follow in her sister’s footsteps by enrolling at the University of Pittsburgh.

“Pitt felt like a city in and of itself,” she recalls. “It had so many departments, student groups, and opportunities that I knew I could dig into it and eventually find my passion and my true self.”

She started that digging her freshman year by volunteering for Keep It Real, a student-run organization that provides tutoring and mentoring for Somali Bantu refugees in Pittsburgh. She was paired with a young girl named Fartuna, whose family had been driven out of Somalia and forced to live in refugee camps in Kenya before resettling in the United States.

Baron helped Fartuna feel welcome when she often felt like an outsider.

“Everyone looked at me differently,” Fartuna, now 19, says. In her Pittsburgh-area high school, random students would ask her the same questions over and over. Where did she come from? Why did she wear a head scarf? It was nice that people were interested, she says, but it also made her feel more like a curiosity than a classmate.

In contrast, Fartuna recalls Baron just let her be. “It was nice having someone who treated me as an equal.”

Baron helped her with homework, took her bowling, and even went shopping with her to help her select her senior prom dress. “Jenna is like a big sister,” says Fartuna, currently a student at Community College of Allegheny County.

Helping Fartuna felt fulfilling for Baron as she continued to think about where her own life was headed. Following her interests, she majored in cultural anthropology and studied Swahili, a choice her parents questioned—after all, how many opportunities would she get to speak Swahili in her life?

Quite a few, as it turned out.

After returning to Pittsburgh in 2014, Baron, through refugee social service circles, met Tara Kane Prendergast, a kindred spirit who had an idea to create ARYSE. Baron shared with her a plan to start the PRYSE Academy summer camp. The two decided to join forces.

“Jenna is able to think big-picture one moment, and then two seconds later, she’s singing a silly song with 5-year-old kids,” Prendergast says.

In 2015, Prendergast left town for New Mexico to pursue a master’s degree in community and regional planning. She asked Baron to take over as executive director of ARYSE, and she agreed—continuing to work at United Way as well.

Three years later, Baron faced her dilemma. She had been accepted into a graduate program for social work at Columbia University, where she would focus on issues affecting refugees and immigrants.

But she knew if she went to grad school, ARYSE, still a fledgling organization, would be no more. She wouldn’t allow that to happen, signing on to work full-time for the nonprofit, initially without salary. To support herself, she kept working part-time at United Way. 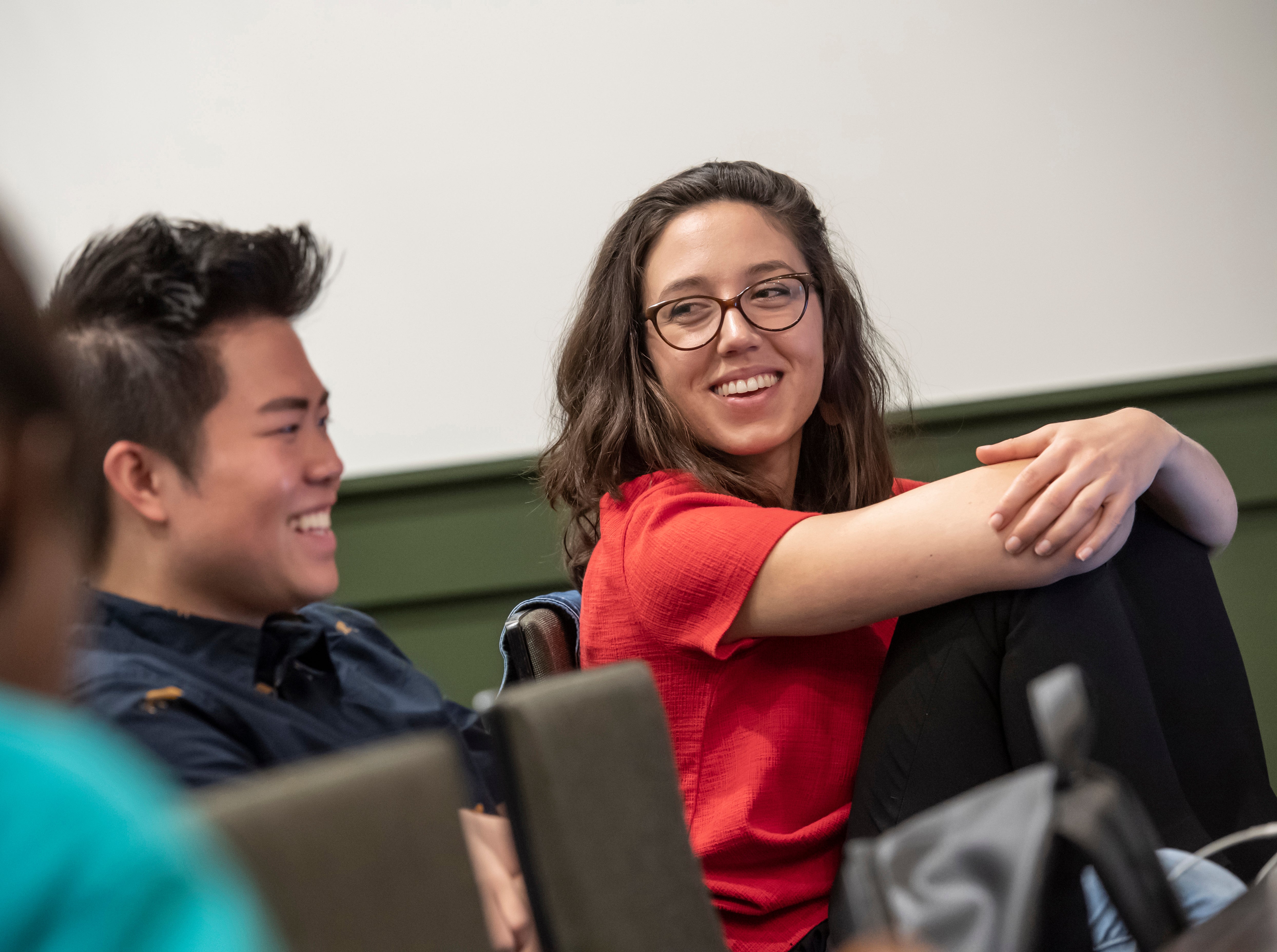 Her choice has paid off. ARYSE is gaining traction, helping more students every year. It has also gained the support of some respected philanthropic entities focused on child welfare and social justice, including PNC Charities, the Grable Foundation, and the Opportunity Fund.

Ever appreciative, Baron knows that if ARYSE can continue to be successful and self-sustaining, it may be replicated in other cities, given that the United States alone has welcomed about 3.5 million refugees over the past 40 years. “Our vision is for ARYSE to be an international model for supporting young people as they transition into their new lives,” she says.

To ensure ARYSE’s viability, Baron’s job is a juggling act—writing grant proposals, talking to foundations about funding, collaborating with other nonprofits, transporting students and campers, and even acting like a kid every now and then.

She tackles thorny issues of resettlement head on, too. During the recent after-school program, a group of elementary school children took turns talking about being bullied in school. Baron visited various school administrators to discuss the incidents and left reassured that her concerns would be addressed.

But Baron doesn’t believe that resettlement should come at the expense of cultural heritage. In addition to academic support, PRYSE encourages some 100 campers to create art reflecting their roots. Campers make paintings with flags and other symbols of their homeland, do traditional dances, and put on fashion shows. They even practice a song and dance and do a flash mob in Pittsburgh’s outdoor Market Square each summer. Baron is not on the sidelines during the flash mob; she’s dancing with her kids.

Niraj, a 17-year-old from Nepal, says PRYSE helped him figure out who he is. “I was trying so hard to adapt to American culture and be someone I wasn’t. I forgot who I was. I was rejecting my culture, but then I met other Nepalese at camp.”

In addition, he says Baron helped him and his family feel more welcome in their new country, as she sometimes joined them for celebrations with traditional Nepalese food. “Jenna is amazing,” he says.

Mohamed concurs. The former Islamic Center of Pittsburgh executive director, who first met Baron when they were both students at Pitt, explains what sets her apart.

“I can name you hundreds of people who volunteered and tutored and then stopped. They come and go. Some people do it with a savior complex. But that isn’t Jenna. She has real relationships with immigrants. She gets invited to their graduations and weddings and birthdays. Jenna is a light people want to be around.”

Even, as little Amani and Ruth will attest, when it’s raining outside.