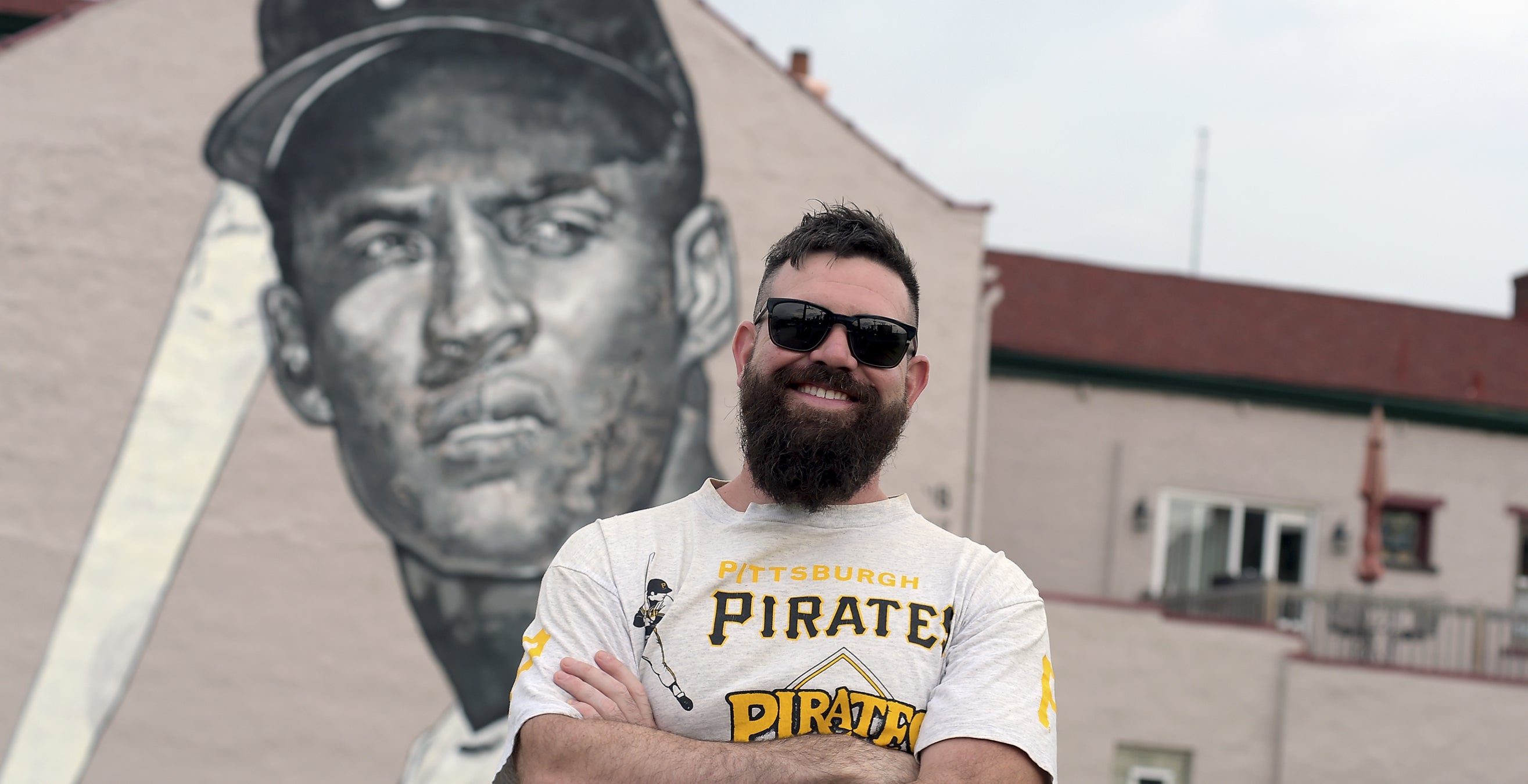 Every day thousands of drivers head onto Pittsburgh’s Interstate 279, better known as the Parkway North. When they do, a legend watches over them. A 40-foot mural of Pittsburgh Pirates Hall-of-Famer Roberto Clemente—squinting from under his baseball cap, bat in hand—transcends the traffic.

The work of art, painted on an outside wall of the family-owned Verdetto’s restaurant, is by Pittsburgh-based artist Jeremy M. Raymer. Both Raymer and the Verdetto family are fans of Clemente’s legacy, as a baseball player and humanitarian.

The mural, completed last year, is one of about 60 works Raymer has created during the past five years. Surprisingly, he began his career not as an artist, but as an engineer. As an undergraduate at Pitt, Raymer (ENGR ’10, ’11) majored in biomechanical and electrical engineering. “It was the perfect fit for my curious and inventive nature,” he says. After a few years in San Francisco, he returned to Pittsburgh, where in 2014 he started working at Westinghouse.

Although focused on science, Raymer kept art in his life. He was raised by a creative family, in the Pittsburgh suburb of Glassport. His dad restored antiques, and his mom enjoyed primitive stenciling. “My first experience painting was making a pine tree on a plate with her stencil paints,” he recalls.

During his collegiate days, he took art classes as electives. “My Drawing II instructor gave me the best compliment I ever had,” Raymer says. “He told me he could write a novel about one of my drawings.” The instructor also encouraged him to try painting, telling him he “drew like a painter.” Raymer pursued art as a hobby while studying at Pitt and later working as an engineer.

In 2013, he created his first mural: reproducing a Salvador Dalí photograph on the exterior of his home in the Pittsburgh neighborhood of Lawrenceville. He describes his mural style as a mix of realism and abstraction, experimenting with different mark-making techniques, such as cross-hatching (using parallel lines drawn closely together to create the illusion of shade or texture) and, at times, pointillism (small, distinct dots of color applied in patterns to form an image).

Sometimes he employs stencils and other times he works freehand, letting EDM music guide his strokes. “I’m like a reverse instrument,” he says. “What you see on the wall is the result of the way my body moves with the beat.”

With a fledging client base, Raymer says he “took a gamble” and left Westinghouse in 2016 to become a full time artist. Since then, he is happy to report that his work has been steady, while continuing to put his Pitt education to good use. “I still use my engineering experience to get through projects,” he says. “There’s a lot of problem solving you have to do on the fly. Mostly it happens at the wall.”

He says he is constantly on the lookout for good walls. How does he value their potential—call it an artist’s intuition. “When I see one, I know it.”

Drivers on the Parkway North are glad he saw the wall of Verdetto’s restaurant.