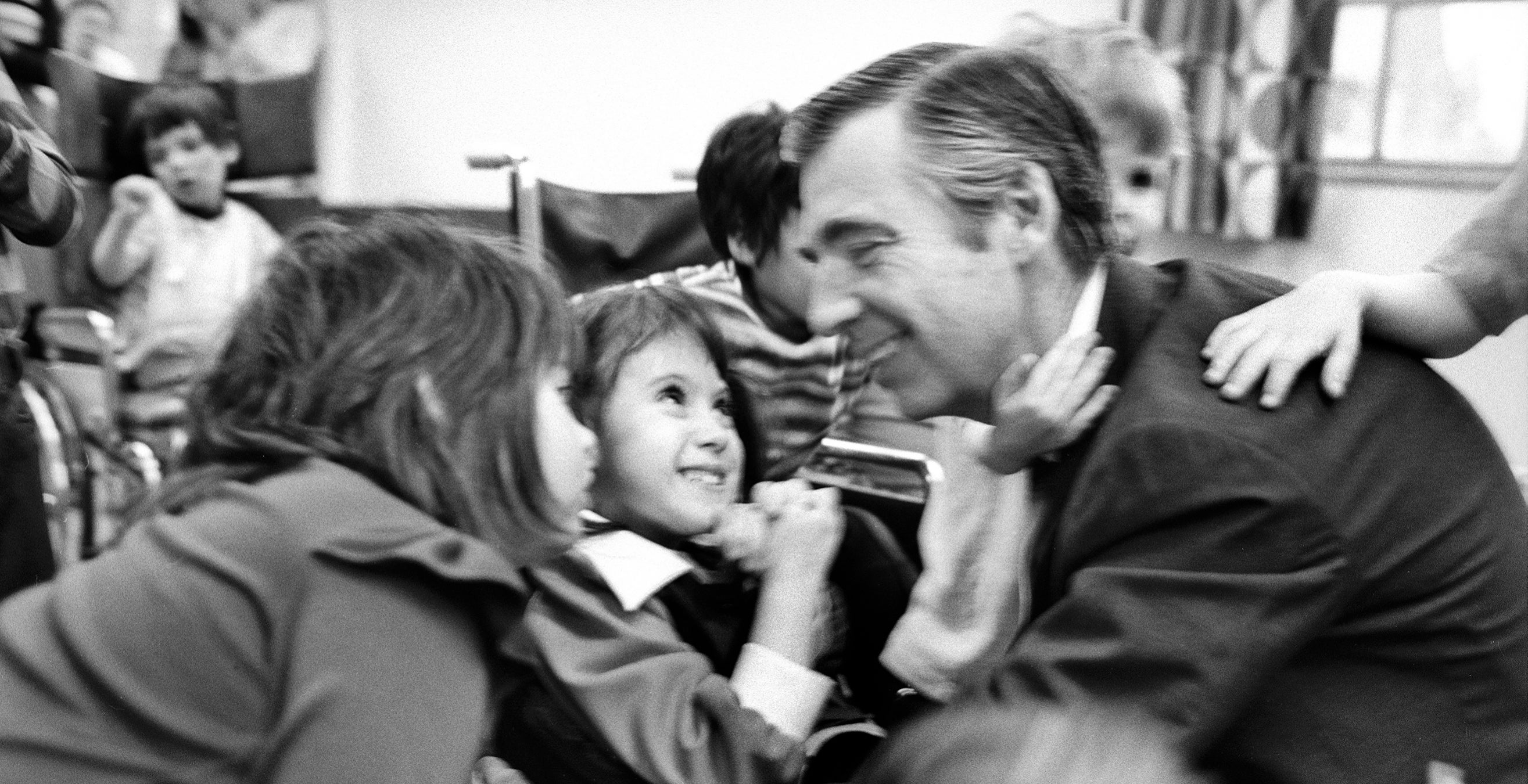 [Editor's Note: The May 1991 edition of Pitt Magazine boasted “Growing Up in the ’90s,” a special section about the ways children were being shaped by a rapidly changing world. “At Pitt, concern for the class of 2010 begins well before its members ever set foot on campus,” wrote then-editor Sally Ann Flecker. “In fact, it’s more likely to begin before the take their first step.” The articles in the section plunge into issues around childcare and childhood, even making a visit to Sesame Street. But it wouldn’t have been complete without a chat with one of the University’s favorite neighbors: Mister Rogers. He had previously served as an adjunct professor in Pitt’s program in child development and child care and counted Pitt child psychologist and associate professor of psychiatry Margaret B. McFarland as a close friend and mentor. When our editorial team revisited this Q&A, we were delighted (but not surprised) to find that the words and wisdom within are still as poignant when applied to the children of the ’20s, as they were to the children of the ’90s.]

Pitt Magazine: As an adult, it’s easy for us to look out on a group of children and appreciate the endless variety and charm that human kind offers. But as kids we all felt at once intrigued by and yet leery of those things that made us stand out in any way. Mostly, we wanted the comfort and assurance that comes with belonging, with fitting in.

Fred Rogers: It’s a tug-of-war that we play all our lives to be accepted as part of a group while still remaining our individual selves. We know that it’s the people who feel strong and good about themselves inside who are best able to accept outside differences—their own or others. We help children develop this ability every time we affirm how special they are to us for being themselves, different from anyone else, yet essentially human.

The gift of self-confidence is the most important and long-lasting gift a child can receive from a caregiver. Children who receive that gift are likely to be the ones who can be teased about their names and their preferences without feeling put down, or diminished inside. They’re also the children who can conform their behavior and their appearance when they have to, as we all must from time to time, without feeling that they are compromising who they are.

They’re also, I believe, the children who can grow into adults and parents who rejoice that they live in a world of unique individuals.

PM: Can you recall situations in which that sense of your own self was tested—as a child or even as an adult?

FR: My middle name, McFeely, was sometimes the object of jokes when I was young, but it, too, was a name my family was proud of.

And now, I know that many people would consider my clothes “traditional.” But I feel comfortable in what I wear, and I wouldn’t want to be told to dress in a different way.

PM: A big part of any child’s learning and development must be those early choices to go it alone—without the immediate help of an adult?

FR: It’s a big step when toddlers insist on doing things themselves. They’ve just come out of infancy, where they have learned, through studying their hands, and holding their toes, that they’re separate from their caregivers—that they’re a person all by themselves.

They want to exercise some of the power that comes with that sense of self, and there is a real urgency about doing just that. Why sit passively and be fed, they think. Why not grab for the spoon and feed yourself?

As they try to do things for themselves, they come to understand more and more about how the pieces of their world fit together. They learn about persistence and frustrations, too, because their trials often end up in defeats. But they also often end up in success.

FR: It’s true that occasionally, children will do something that seems well beyond the so-called normal capabilities for their age. And parents, often, are perplexed, even while feeling proud.

Sometimes these exceptional skills seem to be parts of normal developments that are growing faster than others. But in parents’ descriptions, there is almost always a spoken or unspoken question of how far they should push these talents.

I believe the best use of a child’s early talents, even unusual ones, is in the service of that child’s whole development, particularly in the early years.

Perhaps the most important work of early childhood is the development of healthy self-esteem—the sense of being worthwhile with a life worth living in a world worth living in.

An unusual talent can present a great opportunity to get on with this important work, but it doesn’t always turn out that way.

PM: That inner drive to please one’s parents—to be perfect—seems to be something overwhelming that many of us carry with us from childhood.

FR: There is a tendency to assume that perfection will bring us love—perfect love. Trying to be perfect in order to be loved. That is an unsupportable burden.

Being able to live with oneself and one’s neighbor in honesty and mutual trust is a goal for any growing human being. Anything we can do to help our children build such a foundation in life is one of the greatest gifts we can offer our families and our society.

Learn more about Fred Rogers’ connections to Pitt—and see a video of this commencement speech to the Class of 1993—here.

This article appeared in the in the May 1991 edition of Pitt Magazine.