The lobby of Hillman Library featured a bold graphic: a black-and-white U-turn sign circled and cross out in red, to signify No U-turn. It was the historic logo from China’s first-ever exhibition of avant-garde art in 1989, and it symbolized a dramatic story.

The curator of the groundbreaking exhibition in Beijing was Gao Minglu, now a professor in Pitt’s Department of History of Art and Architecture. Using rare materials from his personal archive, Hillman Library hosted a 2016 exhibit that chronicled the barriers, nearly 30 years ago, to mounting a show of experimental art in communist China. “Despite challenges, Gao Minglu refused to give up,” the Hillman catalog read.

The library’s display revealed how Gao discovered and defined the emerging world of Chinese avant-garde art. It included photographs of Gao in the early 1980s with shaggy-haired young men and women, some of whom eventually became famous artists. They were scattered throughout the country, and they shared a similar sentiment, noted Gao, who visited these “underground” artists when he was an editor at China’s only art magazine. “They are anti-everything,” he said at the time. “They are anti-old, anti-academy, and anti-institution.”

That wasn’t a popular stance in communist China a generation ago. To mount an avant-garde art exhibit in that era, Gao had to obtain official seals of approval from multiple governmental organizations—no easy task given the political climate. The Hillman display included those hard-won official letters, as well as Gao’s extensive notes related to negotiations with the National Art Museum of China, site of the exhibition.

In a photograph from the February 5, 1989 opening, Gao is flanked by banners featuring the “No U-turn” logo. But his challenges were far from over.

Two hours after the historic exhibition opened, artist Xiao Lu fired two bullets into her sculpture, resulting in the immediate shutdown of the show by authorities. The artist’s action, which was a surprise to Gao, was captured in a dramatic photo featured in the Hillman exhibit. Included, too, was a note the artist wrote at the time, explaining the incident as performance art, not a political protest. Also on display was the official letter from the National Art Museum of China closing down the show and fining the organizers for Xiao’s actions.

After tireless lobbying by Gao, the avant-garde exhibit re-opened, but 14 days later a bomb threat closed it permanently. Despite its short run, the exhibition was a defining moment in the history of Chinese art.

“It’s extremely rare to meet somebody who defined a field,” said Barbara McCloskey, professor and chair of his department. “Gao has done that, in part, due to his collecting.”

Gao continues to travel to China to document the work of avant-garde artists there. He estimates he has some 8,000 slides of art works, 5,000 pages of artists’ notes and drafts of manifestos, and 700 letters, among other material.

Efforts are under way to digitize and make accessible his collection. For now, selections from his rare archive are in the online library guide that accompanied the Hillman exhibition at pi.tt/gao1989. 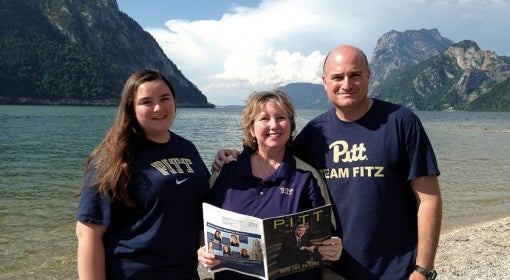