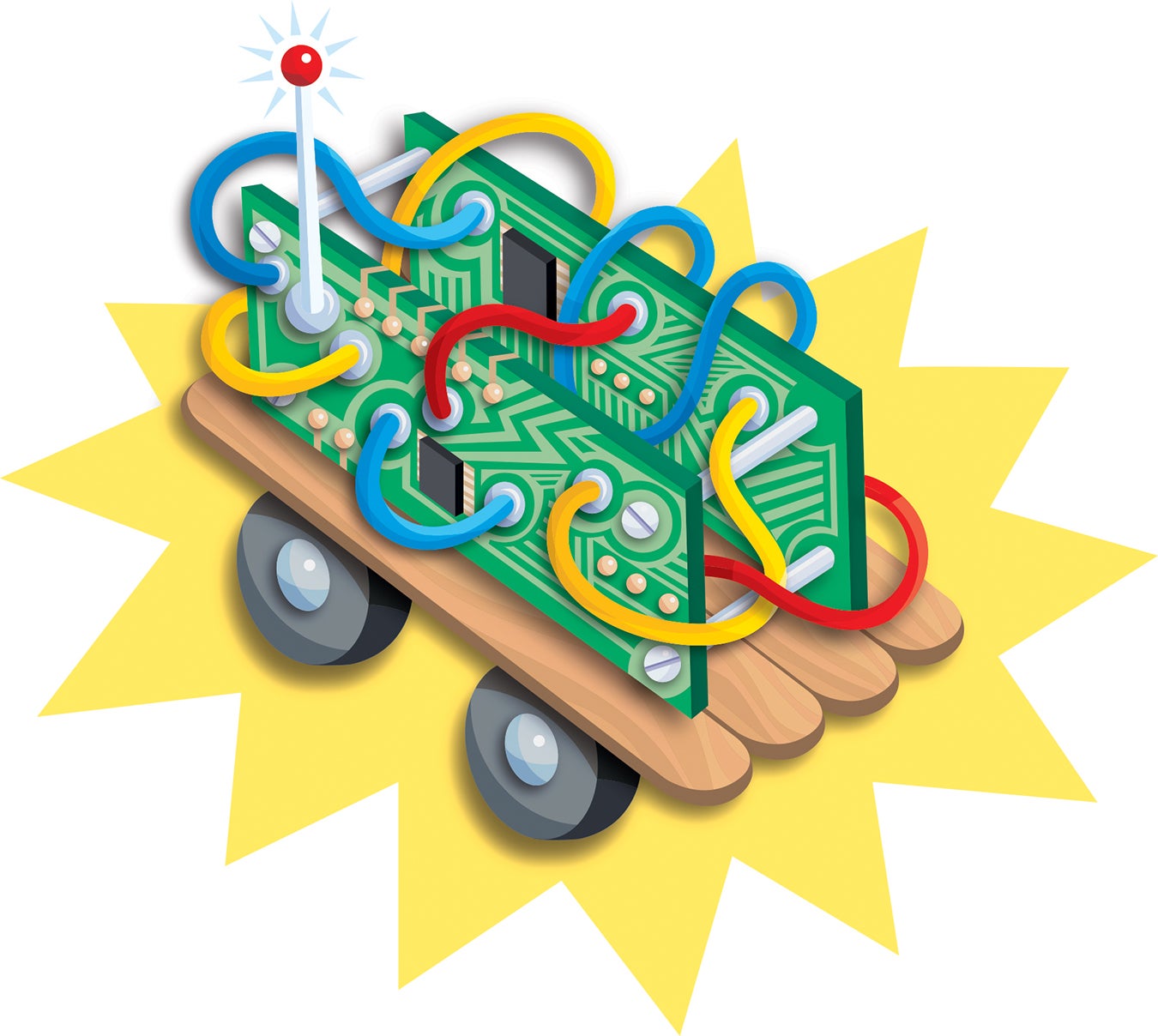 A miniature robot whirrs to life. It is a relatively simple creation—a mess of multicolored wires connects two circuit boards affixed to a wheeled platform made of Popsicle sticks. But the software that directs the robot’s movements is much more complex. As a crowd watches, the tiny machine’s programming smoothly navigates it through a crude tabletop maze fashioned from tape and halved Styrofoam plates. The robot avoids obstructions and easily maneuvers around corners. A number of onlookers smile, impressed.

The robot is powered by software designed on the spot during SteelHacks 2016, a weekend competition of innovation, exploration, and fun. Over 36 hours, four Pitt undergrads on a team called RoboSim toiled with computer screens and electrical components to invent something entirely new.

The second-annual University of Pittsburgh-hosted and student-run event drew more than 50 college student technophiles to the William Pitt Union for the three-day, around-the-clock hackathon. But this isn’t hacking in the illegal sense.

“‘Hacking,’ in the context that we use it, means putting together ideas with no previous preparation and using only the materials available at the hackathon,” says Ritwik Gupta, Pitt computing science student and SteelHacks founder.

Like other hackathons, SteelHacks invited teams to collaborate to develop new—or modify existing—hardware or software within a time constraint. With help from Pitt’s Department of Computer Science in the Dietrich School of Arts and Sciences and from the Swanson School of Engineering, along with corporate sponsors including Google and Lockheed Martin, SteelHacks teams had access to an array of cutting-edge technology for their projects. There were virtual reality headsets, motion-capturing software, gesture control armbands, open-source software, smart watches, and microprocessors. At the hackathon’s end, judges would select the winners at a science-fair-style expo.

“We had no plan on what we were going to do, we just had the rough idea,” says Aaron Miller, RoboSim member and Pitt computer science and physics student. The team wanted to create a software package that would make it easier to test robotic prototypes as well as the software that directs them. Ultimately, RoboSim’s goal was simply to “make something cool.”

To do that, the Pitt team’s members fashioned original software by tweaking an existing 3D-creation computer program, and they engineered a test robot, too. They finished their tasks with only 10 minutes to spare in the competition.

In the end, team RoboSim’s impressive work earned it first place. Other groups, too, showed off exciting work. One team created software that converts words into piano music reflecting the words’ mood and tone. Another made a smartphone application for pop quizzing users and reminding them to study. A team even built a 3D game in which players use a “Panther Cannon” to prevent lions from climbing the Cathedral of Learning.

As the weekend’s activities waned, groggy hackers headed home to catch up on sleep. But the SteelHacks experience will stay with them, in the next class or task that demands creative problem solving and imaginative thinking.

A pediatrician talks about helping children—and parents—find the fun in healthy eating.