It's easier than ever to submit your own Class Note for publication consideration! Just click here.

Earl M. Blecher GSPIA ’70 published The Mind and the Meaning of its Cultural Imperatives (CreateSpace), which covers the author’s interdisciplinary, intellectual journey toward an understanding of consciousness and its evolution.

Richard McDonough A&S ’71 is the author of two books and dozens of internationally refereed journal articles and book reviews, in addition to serving as a guest editor for the philosophy journal Idealistic Studies. He’s lived and taught in Singapore for the past 35 years.

Nasario García A&S ’72 is the subject of the documentary, Nasario Remembers the Río Puerco. A folklorist, García’s memoir, Hoe, Heaven, and Hell: My Boyhood in Rural New Mexico (University of New Mexico Press) was named 2016 Best Autobiography by the International Latino Book Awards.

Dennis Palumbo A&S ’73 was interviewed by Barry Kibrick on Between the Lines about his book, Phantom Limb (Poisoned Pen Press). Palumbo is a licensed psychotherapist, Oscar-nominated screenwriter, and author living in Los Angeles, Calif.

Deborah A. Holland A&S ’74, EDUC ’80G was elected to Pittsburgh Mercy Health System’s board of directors. She is president of DLJ & Associates, a consulting firm in Canonsburg, Pa.

Annette Stemhagen GSPH ’75, ’82, a pharmacoepidemiologist and senior vice president of safety, epidemiology, registries, and risk management at United BioSource Corporation in Blue Bell, Pa., has been nominated to PharmaVoice’s 2017 “100 Most Inspiring People in the Life Sciences Industry.”

Marc Rudov ENGR ’76 published his second book, Brand Is Destiny: The Ultimate Bottom Line (MHR Enterprises), which explains how and why a brand establishes a company’s purpose and direction. Rudov is a speaker, media commentator, and branding advisor to CEOs.

Daniel C. McGrogan LAW ’80 was elected to Pittsburgh Mercy Health System’s board of directors. He is the owner of McGrogan Consulting, which provides strategic planning to families. He lives in Mt. Lebanon, Pa.

Joseph A. Gardella Jr. A&S ’81G has been appointed to the U.S. Environmental Protection Agency’s Science Advisory Board. He is a professor of chemistry at the University of Buffalo in New York, and an expert in environmental analytical chemistry.

Ivan Dzombak ENGR ’84, ’94G was promoted to technical fellow at HARMAN International, a leading manufacturer of automotive electronics and audio equipment for consumer and professional use. He resides in the Ann Arbor, Mich., area.

Randy Sultzer ENGR ’86 authored his for e-book of historic, biographical nonfiction, Generating History: Profiles of an Early American Family (Smashwords), which chronicles a family’s journey through some of the nation’s most formative years.

Dwayne Pinkney GSPIA ’87 has been named chief financial officer and senior associate vice chancellor for finance and administration at the University of North Carolina at Chapel Hill. He most recently served as the university’s vice provost for finance and academic planning.

Ross Guckert ENGR ’89 was installed as the U.S. Army’s deputy program executive officer for combat support and combat service support, and elevated to the Army’s Senior Executive Service. He works in the Detroit Arsenal in Warren, Mich.

Ted. A. Schroeder A&S ’93, LAW ’97 was promoted to the office managing shareholder of Littler’s Pittsburgh and Morgantown, W.Va., offices. As an attorney, he represents management clients in all aspects of employment and labor law.

Julie Kline LAW ’97 was promoted to shareholder at Strassburger McKenna Gutnick & Gefsky. She is co-chair of the firm’s business services group in the Pittsburgh office.

Ron Schirato UPJ ’97 is the vice president of the civil engineering division of Larson Design Group, based in Williamsport, Pa. He’s an experienced civil engineer, project manager, and operations manager for both small and larger engineering firms.

Robert J. Salzer A&S ’01 was named partner at Williams Family Law. He is a divorce attorney at the Bucks County, Pa., law firm.

Kimberly S. Tague A&S ’01 was promoted to shareholder at Strassburger McKenna Gutnick & Gefsky. She is co-chair of the Pittsburgh-based firm’s real estate group.

Levi K. Logan A&S ’03, LAW ’07 was named partner at Meyer, Unkovic & Scott. He is a member of the Pittsburgh-based firm’s employee benefits, private clients, and corporate and business law groups.

Marie Bertrand BUS ’04 was named partner at Day Pitney. She is a member of the firm’s transactional department, and works out of the Hartford, Conn., office.

Erica Laughlin LAW ’04 was promoted to shareholder at Strassburger McKenna Gunick & Gefsky. She is chair of the firm’s business development committee, and works out of the Pittsburgh and. Greensburg, Pa., offices.

Jill Weimer A&S ’04, LAW ’07 was promoted to shareholder at Littler. She is an employment attorney at the firm’s Pittsburgh office, and serves as pro bono counsel for a local nonprofit.

Michael G. Monyok LAW ’05 was named partner at Meyer, Unkovic & Scott. He is a member of the Pittsburgh-based firm’s intellectual property, corporate and business law, and new ventures and entrepreneurs groups.

Laura Poko PUG ’06 traveled to Kasaali, Uganda, to help create a curriculum in sales and marketing at The Glow Effect Centre for Women & Girls, which provides training in leadership, women’s health, social issues, and vocational skills. Poko is the director of marketing and communications at Global Cold Chain Alliance in Alexandria, Va.

Tony J. Thompson LAW ’06 was named partner at Meyer, Unkovic & Scott. He is a member of the firm’s litigation and dispute resolution, new ventures and entrepreneurs, intellectual property, employment law and employee benefits, and construction groups.

Anna Quider A&S ’07 was elected vice president of The Science Coalition, a nonprofit, nonpartisan organization of leading public and private research universities. She was appointed the government affairs liaison for the Association of Public and Land-grant Universities’ Council on Research. Quider is Northern Illinois University’s federal relations director in DeKalb, Ill.

Whitney Grespin GSPIA ’09 followed in the footsteps of notable female geographers including Amelia Earhart when she carried the Society of Woman Geographers’ flag to Bala Hissar, an ancient fortress in Kabul, Afghanistan.

Kevin McGrath A&S ’10 was elected to the board of directors of the Literacy Council of Norristown, a Pennsylvania nonprofit. McGrath is an attorney in Hamburg, Rubin, Mullin, Maxwell & Lupin’s litigation and trusts and estates departments. 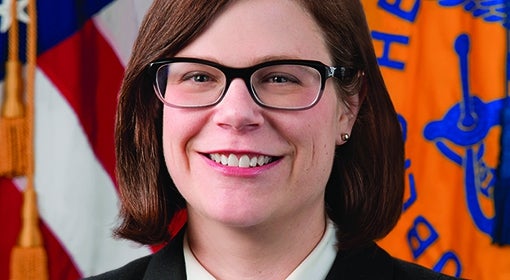 A busy alumna finds time to give back.