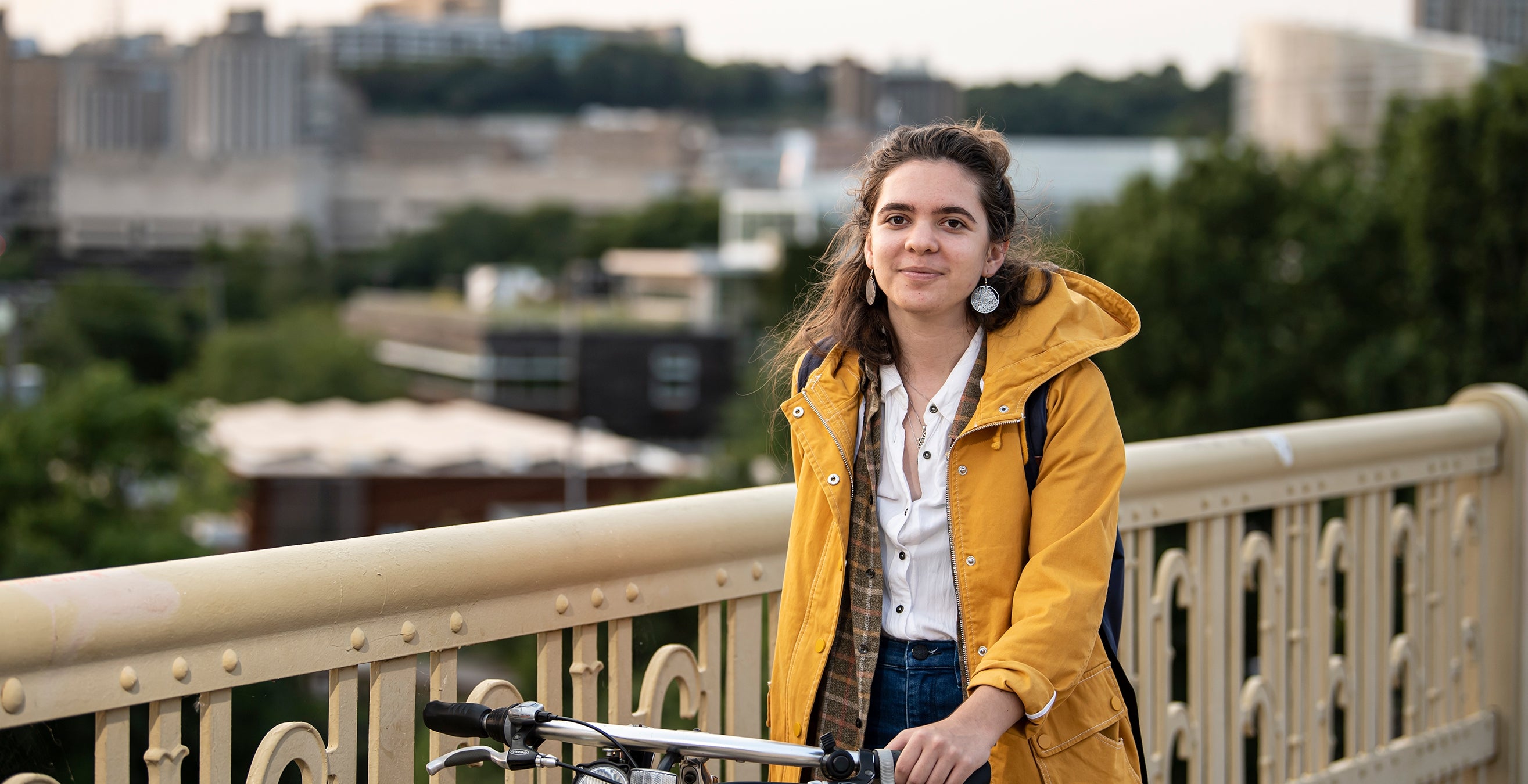 On the surface, the world seems to be turning as usual. It’s April—the chill of early spring is still hanging in the air—and Avocet Greenwell (pictured above) is only a few weeks away from graduating from the University of Pittsburgh. But she’s not really feeling the satisfaction of her accomplishment or the joyful anticipation of receiving her diploma. Instead, she feels an overwhelming sense of doubt as she’s holed up in her shared off-campus apartment, where she’s finishing the semester remotely like the rest of Pitt’s students.

This isn’t how the Cincinnati native had imagined the culmination of her college days. She had started taking some college classes at a local university while she was still a senior in high school, from which she graduated as salutatorian. After beginning her first year at Pitt with that handful of college credits already under her belt, she saw the opportunity to fast-track her entry into the workforce by graduating in three years instead of the customary four.

“I’ve always had a preference for working, over school, ever since I was a junior in high school,” she says, referring to when she worked as a restaurant hostess back home. She took her work ethic with her to Pitt, majoring in urban studies. Over three years, she honed her interest in sustainable transportation and safe, accessible streets, and she successfully sought out three different internships to get hands-on experience in the field.

She looked forward to joining the workforce. With no set plans in place after graduation, she would be free to explore what the world has to offer. Then the COVID-19 pandemic hit, and what seemed like the perfect decision to wrap up her studies early and move on to new things in new places now leaves her with a gaping vulnerability.

“Oh my God,” she thinks, shell-shocked, as the seemingly endless possibilities of post-graduation seem to disappear before her. “This was a mistake.”

Now it will be more difficult to find a job in her desired field, or any job at all. With restaurants and nonessential businesses shutting down, industries everywhere face precarious futures. And volunteering or traveling abroad is out of the question because of travel bans. It’s as if the pandemic has left her stranded, the islands of possibility no longer visible to her.

Of course, Greenwell couldn’t have predicted that precisely at her graduation moment, a global pandemic would precipitate the world’s biggest economic about-face since the Great Depression. Who could have? For better or for worse she is far from alone in her sudden upheaval.

By nearly all economic indicators, the Class of 2020 was poised to graduate into the best labor economy in recent memory. The start of 2020 opened to a job seeker’s market, the unemployment rate hovering at about 3.5%—the lowest it had been since the late 1960s, according to the U.S. Bureau of Labor Statistics.

But in April 2020, as college students around the country prepped for graduation, the world of opportunity that had existed just one month earlier had effectively closed its doors. Schools, businesses and organizations were forced to shut down in the face of a potentially deadly viral threat; subsequently, at a time when about 3 million people were expected to graduate college and enter the workforce, more than 20 million people now found themselves jobless, causing the unemployment rate to soar to 14.7%. And although this was the highest the country had seen since the Great Depression, many experts believed it was actually an underestimate of the real unemployment rate.

Some age groups fared worse than others: One in every four 20- to 24-year-old was left unemployed, and this number didn’t even account for the soon-to-be college graduates, like Greenwell, who would soon be looking for their first post-degree jobs.

But help was coming.

While Greenwell and 4,196 other Pitt seniors prepared to graduate, officials at the University quickly mobilized. “As soon as we recognized the potential impact of COVID-19 on our graduating seniors and their job searches, we began strategizing about how to connect with them and provide appropriate resources,” says Cheryl Finlay, associate dean of students and director of Pitt’s Career Center.

At the direction of Chancellor Patrick Gallagher and under the leadership of Senior Vice Chancellor for Engagement Kathy Humphrey, the University formed the Graduate Support Task Force, through which staff from across the University, including Finlay, collaborated to create a multifaceted action plan to support graduating seniors as they started their careers. 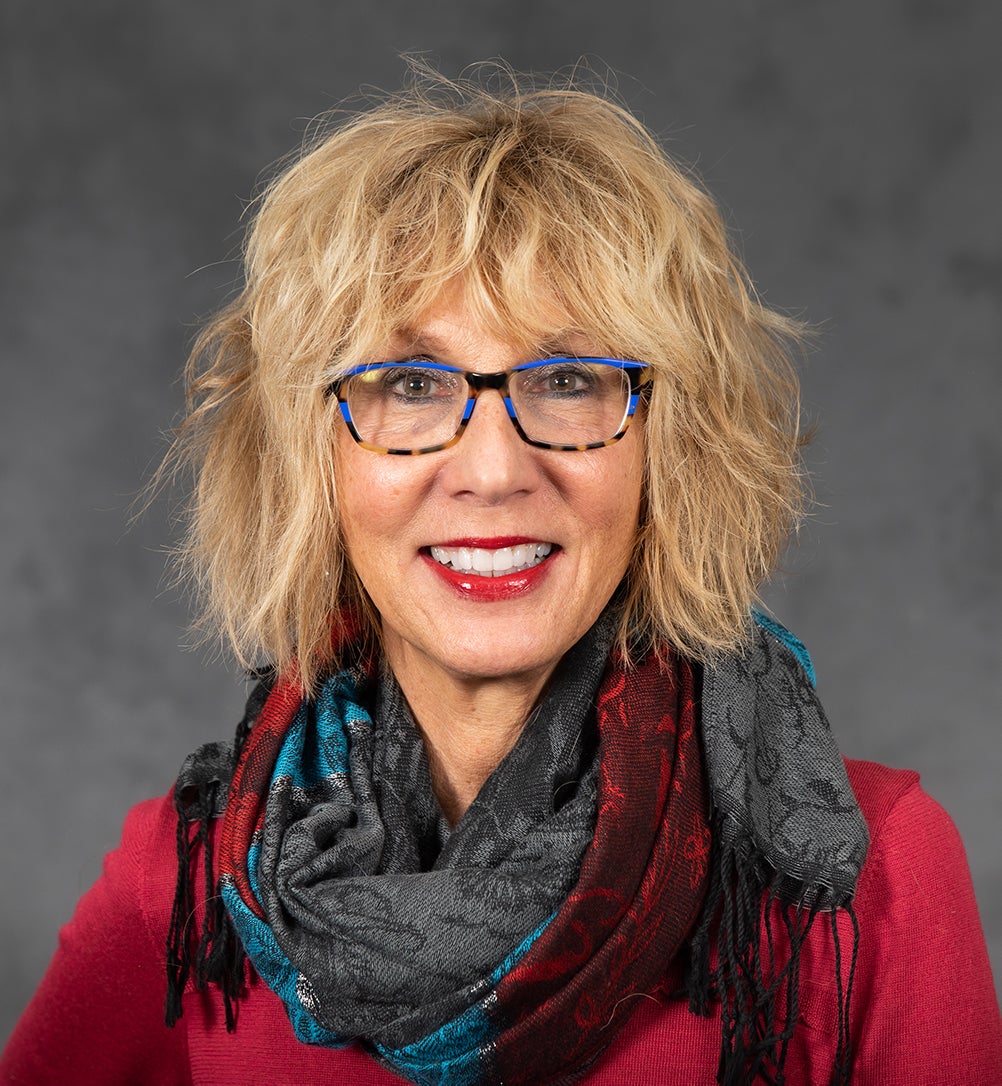 It included a University-wide phone campaign during the last two weeks of the spring semester. About 200 volunteers called all graduating seniors to gather information about their post-graduation plans; to find out how the COVID-19 pandemic was affecting those plans; and, if needed, to connect them with career support and other resources for short-term job, internship and volunteer opportunities, as well as skill-building and mentorship outlets, all available through a centralized website: seniors.pitt.edu.

Alumni played a key role in the task force’s efforts—whether by sharing short-term job or internship opportunities available to Pitt 2020 grads or, like a number of 2008 and 2009 graduates, participating in focus groups to help the University better support the Class of 2020.

“The Class of 2020 is entering a job market reminiscent of that of the classes of 2008 and 2009, where an economic downturn resulted in a scant number of career-launching positions for graduates,” says Finlay. “Fast-forward 10-plus years, and these alumni can lend insight into the lessons they learned.”

Like many of her peers, Greenwell struggles to come to terms with the world’s new economic and social realities. She has a lot of phone conversations with her mother before graduating. She remembers saying, “Mom, I have no idea what I’m doing.”

Not surprisingly, Greenwell spends an inordinate amount of time searching for and applying to jobs after graduation, but her mom encourages her to find other ways to pass time, too. “You can’t look for a job 24/7,” her mom says. “You’ll burn yourself out.”

Realizing that landing a career-launching job is important for many new graduates, Finlay echoes the sentiments of Greenwell’s mother, emphasizing “the importance of continued skill-building, especially for those graduates who are still seeking opportunities.” Even if those skills aren’t necessarily directly related to graduates’ preferred career trajectories, Finlay says they can open new doors.

After graduation, and back at her childhood home in Cincinnati, Greenwell can’t help but feel as if she is in a kind of limbo. It feels “very surreal,” she says, particularly without an in-person graduation ceremony—as if she hadn’t even graduated. “There were a lot of ‘oh-[shoot]’ moments happening there, too,” she adds.

In the midst of those moments comes an unexpected bright spot: She receives an email informing her of a mentorship opportunity offered through Pitt Commons, an online platform where Pitt students, alumni, faculty and staff can find each other and create connections.

As part of the efforts for the Class of 2020, the Graduate Support Task Force hopes to pair 2020 grads with more-established alumni—in careers of interest to them—for “flash-mentoring” sessions.

Well, Greenwell thinks, why not give it a try?

She pairs with Zack Ambrose (A&S ’08), an urban studies and history major originally from Johnstown, Pennsylvania, who moved to Seattle, Washington, to get his master’s degree in urban planning. Now—as a community outreach specialist at the public transit agency Sound Transit—Ambrose contacts and works with community members throughout the Puget Sound region on developing and operating sustainable public transportation systems.

But before making the cross-country trek, Ambrose started his career at a small Pittsburgh nonprofit in 2008. “We were sort of growing,” he remembers, “and then the recession hit, and we really started to shrink.” Amid budget uncertainty and the stress that accompanied it, Ambrose learned to “adapt and adjust on the fly, and to always kind of think of what other skills you can be developing.”

He and Greenwell talk about his career trajectory as well as his current work, which he describes as “being the public face of Sound Transit projects, the person people can contact and trust.”

“That was actually so cool,” Greenwell says after her conversation with Ambrose. “It’s really great to be able to hear what he did, his thoughts on the path that he took. He did the same kind of thing I’m looking to do,” including going to graduate school at some point.

When she asks him what he thinks about going straight from undergrad into an urban planning master’s program, Ambrose tells her about how much he valued the few years of work he had done before grad school. She finds Ambrose’s point of view “really validating, that I am making a decision that is going to benefit me.” 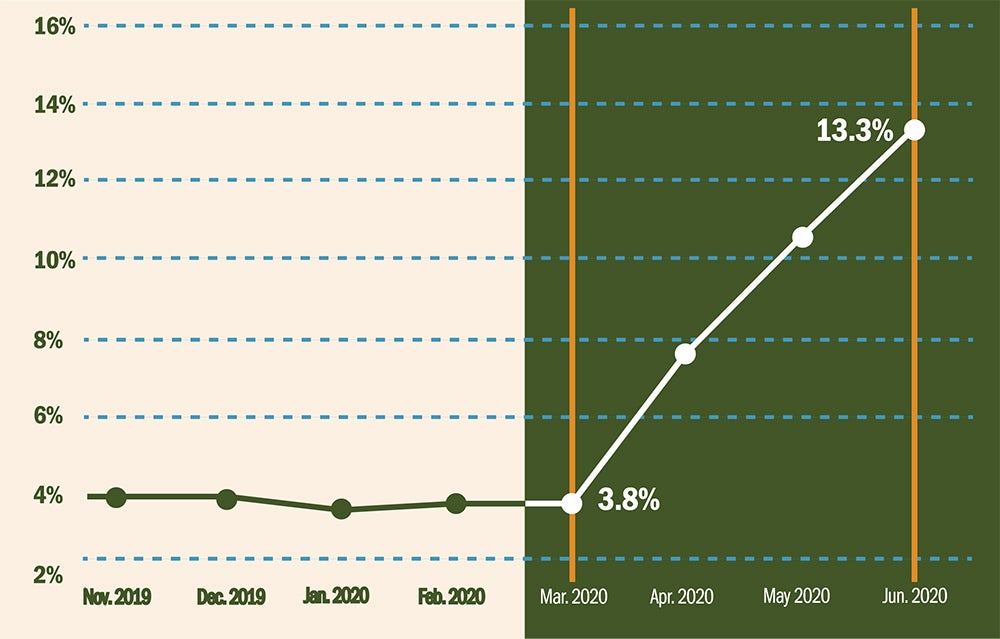 But finding a job wasn’t going to be easy. At the time of graduation, at least 15% of Greenwell’s Class of 2020 peers who were contacted as part of the University’s phone campaign had indicated that the COVID-19 pandemic had directly impacted their employment plans or job search, whether through rescinded offers, delayed start dates or hiring freezes. (Over the past eight years, 94% of graduating Pitt students successfully transitioned either into employment, graduate school or another career-building opportunity, according to the Career Center.)

In such an unfriendly climate, Greenwell seeks out a connection she had already made as a student intern. After having interned with Point Line Projects, a local content and curatorial agency focused on architecture and design, she was able to secure a bit of part-time editorial work for the agency, gaining resume-building experience, as well as a small source of income.

But what else can she do? Sure, she could spend her down time cooking, biking and reading, all interests she enjoys. But she isn’t one to remain idle career-wise.

Greenwell turns to Handshake, the job board curated by the Career Center, where Pitt students and graduates can find employment and internship opportunities. By teaming up with the Pitt Alumni Association at the beginning of the pandemic, the Career Center has been able to quickly fill Handshake with opportunities gleaned from the University’s alumni network.

Through Handshake, Greenwell finds an internship for summer 2020: a research and content-creation position at The Ehrlichman Group. The transportation consulting firm was founded by Courtney Ehrlichman (A&S ’04), who was also a student of urban studies at Pitt. When she comes across the posting, Greenwell thinks, “This looks kind of perfect,” even if it is only for the summer.

So, after spending May with her parents in Cincinnati, she returns to Pittsburgh to begin her part-time work and internship. She also continues to look for a fulltime job while “trying to balance that with the knowledge that it might not happen immediately.”

But it did happen. In August, a contact from a former internship at the City of Pittsburgh reached out to her about a position working on bike and pedestrian projects at SB Thomas & Associates Inc., a local, woman-owned construction firm. “The more I learned about it, the more I thought, ‘Wow, this is truly serendipitous.’” When she’s offered the job, she happily accepts.

“In hindsight, there really was not much time when I was without much ground beneath me,” she says. “I feel like in some ways it’s the luck of the draw and good timing, even with the world being what it is right now.”

Unfortunately, not everyone has had the same luck. Since the beginning of the pandemic, the unemployment rate for 20- to 24-year-olds has remained high. But for Greenwell and Pitt’s Class of 2020—who were dealt this once-in-a-century challenge—they have the University community, near and far, offering to lend a helping hand.