The only constant is change—and the Pittsburgh campus has seen a lot of it. Slide from past to present at some of the University’s most iconic locales to see just how different things are these days, and how so much has stayed the same. Have a spot in mind that you’d like to see get the “Now and Then” treatment? Tell us about it at pittmag@pitt.edu, and we might feature it in an upcoming issue.

It’s nearly impossible to imagine the University of Pittsburgh, or even Oakland, without the towering presence of the much-beloved Cathedral of Learning. In July 1929, the gothic skyscraper imagined by Chancellor John Bowman was still coming into being. You can even still see the houses that once sat at the corner of Fifth Avenue and Bigelow Boulevard. These days, the awe-inspiring landmark (and the tallest educational building in the Western Hemisphere) looks like it's always been here. 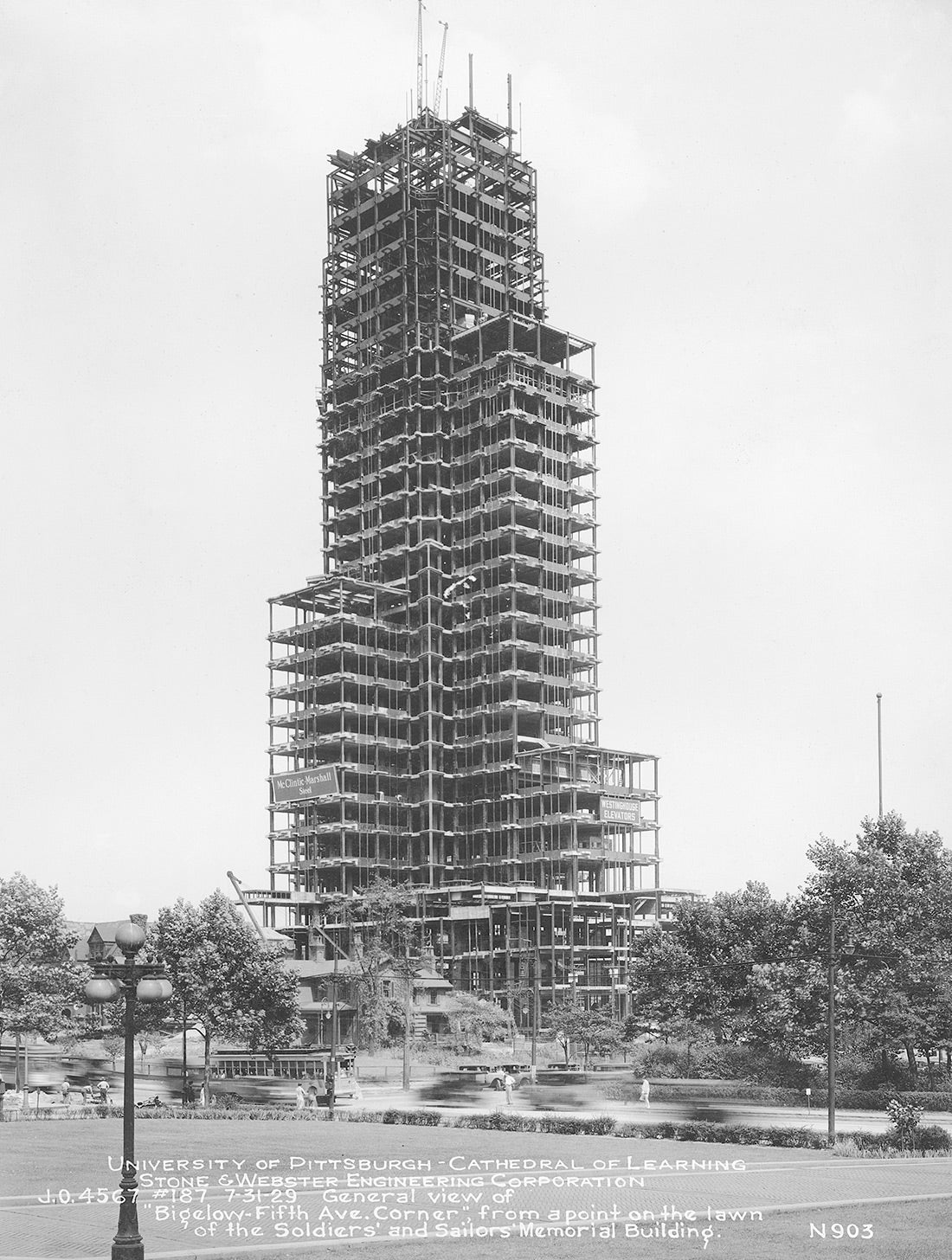 Do you remember the first time you drove up Forbes Avenue and watched the Cathedral grow taller over the bustling street? The signs and storefronts may have changed through the years (goodbye Strand Theatre and the sign for the Iroquois Apartments; hello Sennott Square on the right), but that magnetic vista is still the same. 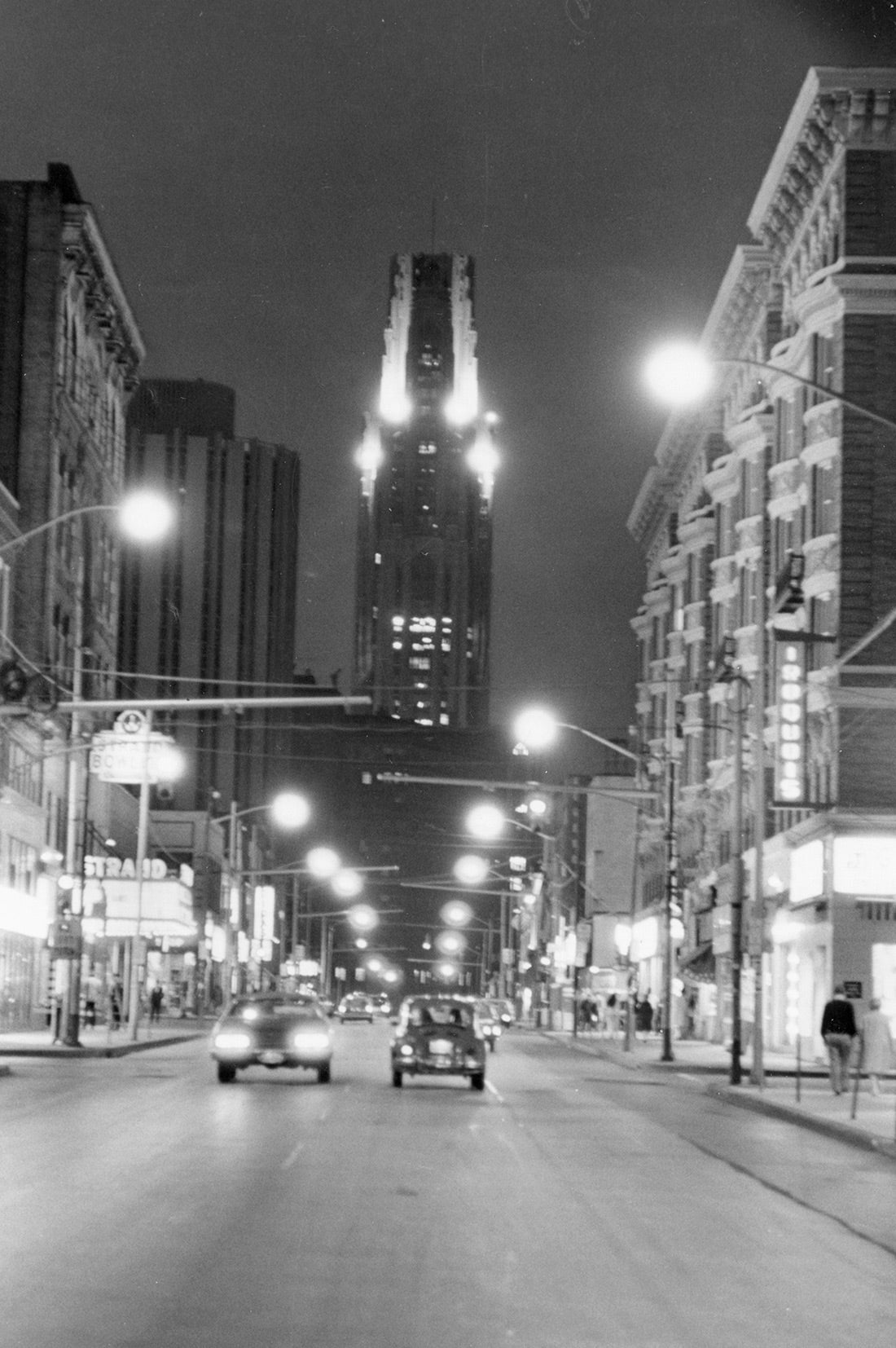 Once upon a time, putting pedal to pavement near the Cathedral often meant either dodging people on the sidewalk or vehicles in the street. Fortunately, modern-day bikers zipping down Bigelow Boulevard have their own designated lanes carved out in red pavement, thanks to a full redesign of the stretch between the Cathedral of Learning and the William Pitt Union completed in late 2020. There’s enhanced accessibility for bikers and people with disabilities and new and improved safety measures for pedestrians. Add new green landscaping and one of campus’s busiest thoroughfares has never been prettier. Ding, ding, ding goes the trolley — at least it used to. What was once the territory of packed cable cars and tail-finned sedans is now home to busy buses and hybrid vehicles. What hasn’t changed? The street is still full of student-serving stores and restaurants. 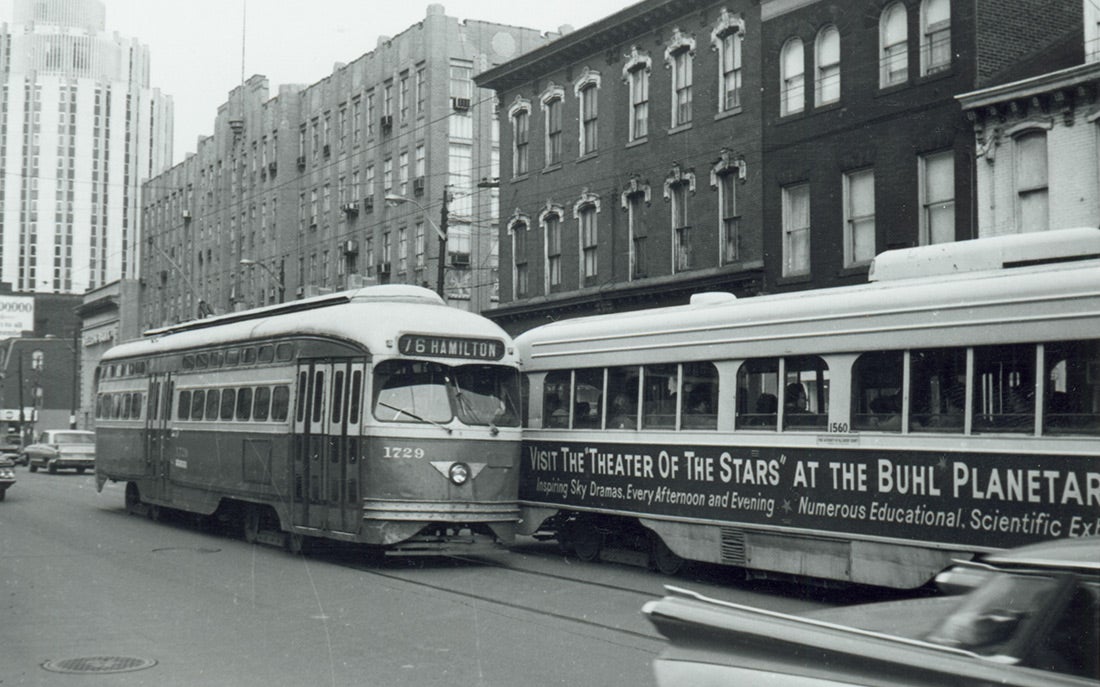 A longtime hub of student housing, today’s Quad has one major difference from that of yesteryear. In the place of a sea of asphalt and parked cars is a pedestrian courtyard perfect for tête-à-têtes and coffee breaks. However, you'll still see plenty of moving carts and suitcases rolling through at the beginning and end of the academic year. 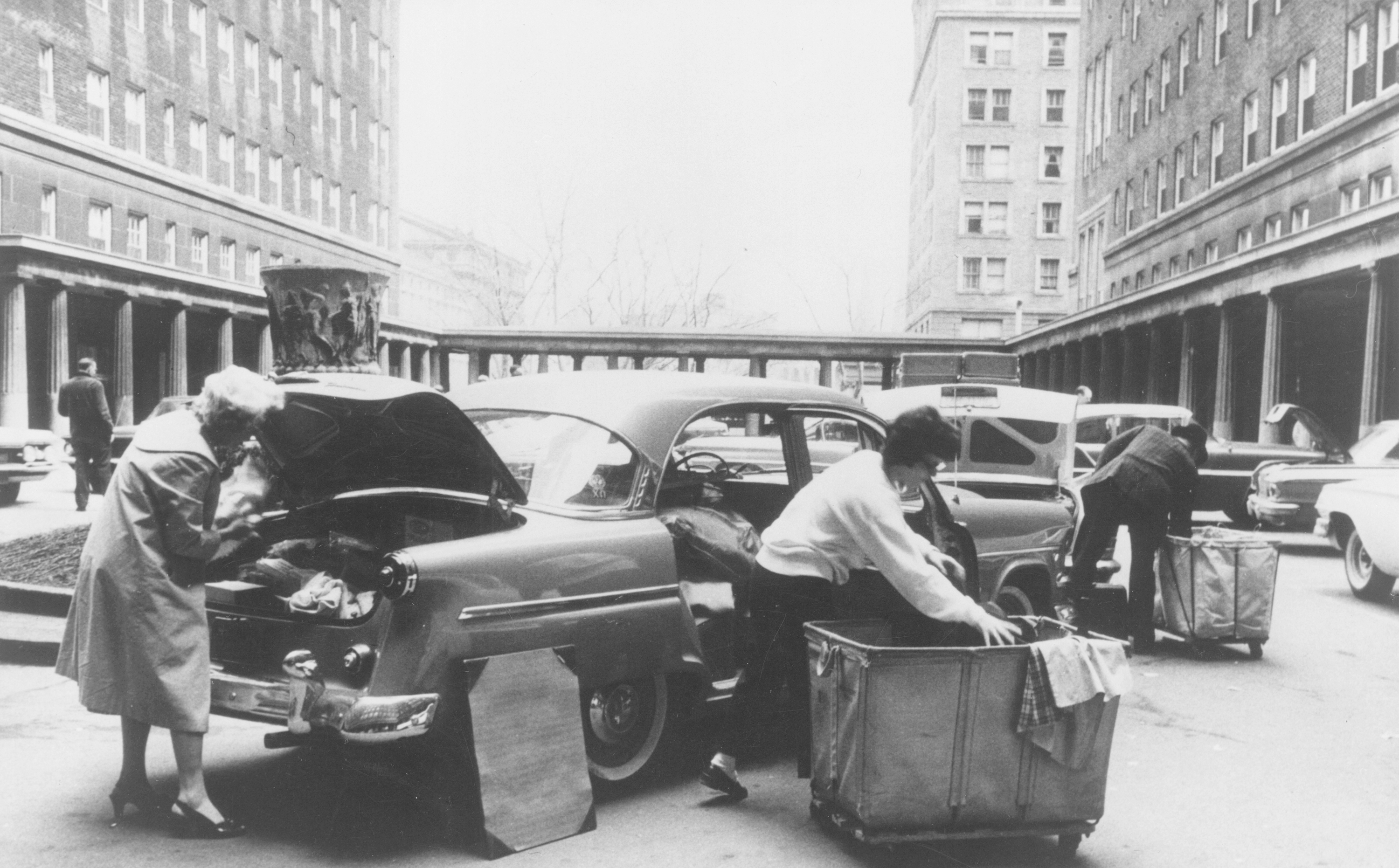 The year 2020 was . . . momentous. (That's one way to put it.) Among the many changes that unfolded in a year of strife and loss was the closing of The Original Hotdog Shop, a favorite late-night haunt for six decades. The end of an era elicited many emotions from students and alumni (the New York Times even wrote about it), but The O made one last mark before officially shuttering: The owners donated seven tons of potatoes that would have been used for fries to local food banks. The storefront is now under construction and is expected to host two new restaurants and many new memories. 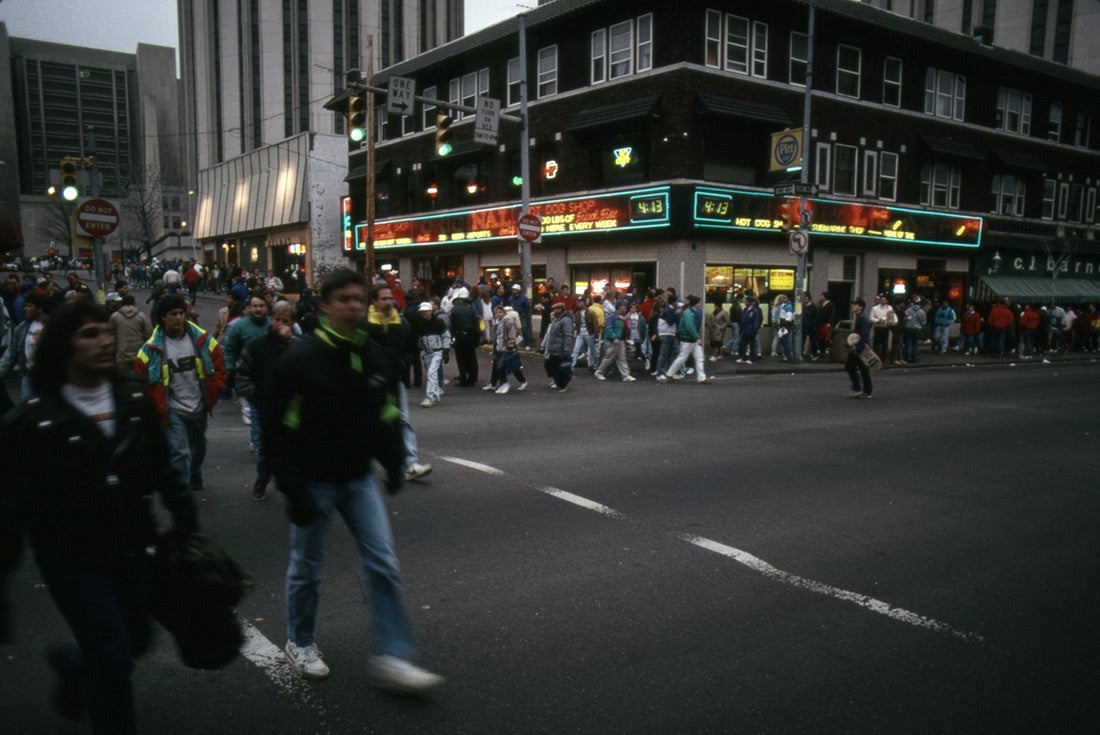 Dedicated in 1915, the original home of the Mellon Institute of Industrial Research (known simply as the Mellon Institute) was founded within the University of Pittsburgh with the support of brothers and Pittsburgh philanthropists Andrew W. and Richard B. Mellon. These days, the Mellon Institute, now affiliated with Carnegie Mellon University, can be found on Fifth Avenue. The original building, meanwhile, became home to Pitt’s Physics and Astronomy Department and was renamed Allen Hall in 1967 to commemorate longtime Pitt physics professor A.J. Allen. It looks as majestic as ever — but we sure do miss the look of those old cars. 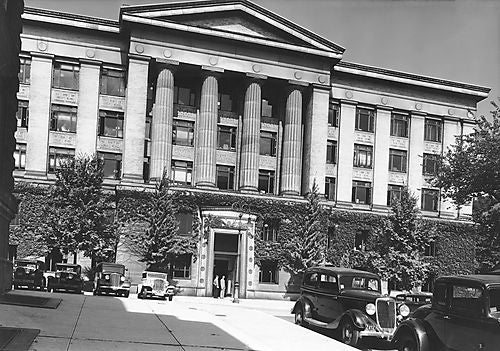 Now, that’s a lot of tuxedos. Over the years, the Schenley Hotel hosted some illustrious guests, including four U.S. presidents, Eleanor Roosevelt, Katharine Hepburn and Babe Ruth. After the University of Pittsburgh bought it in the 1950s, the building was used as both a men’s residence hall and the student union until the early 1980s, when the entire building was renovated and renamed the William Pitt Union. The ballroom has since hosted thousands of University events over the decades, but in the past year, the room has provided an excellent setting for COVID-conscious classes. (Left: Ralph W. Johnston, American, 1873–1962; (Group Portrait: Banquet in Honor of Rt. Reverend Cortlandt Whitehead, Bishop of Pittsburgh, at the Hotel Schenley, Pittsburgh), 1912, gelatin silver print; Carnegie Museum of Art, Gift of Carnegie Library of Pittsburgh, 84.17.77) 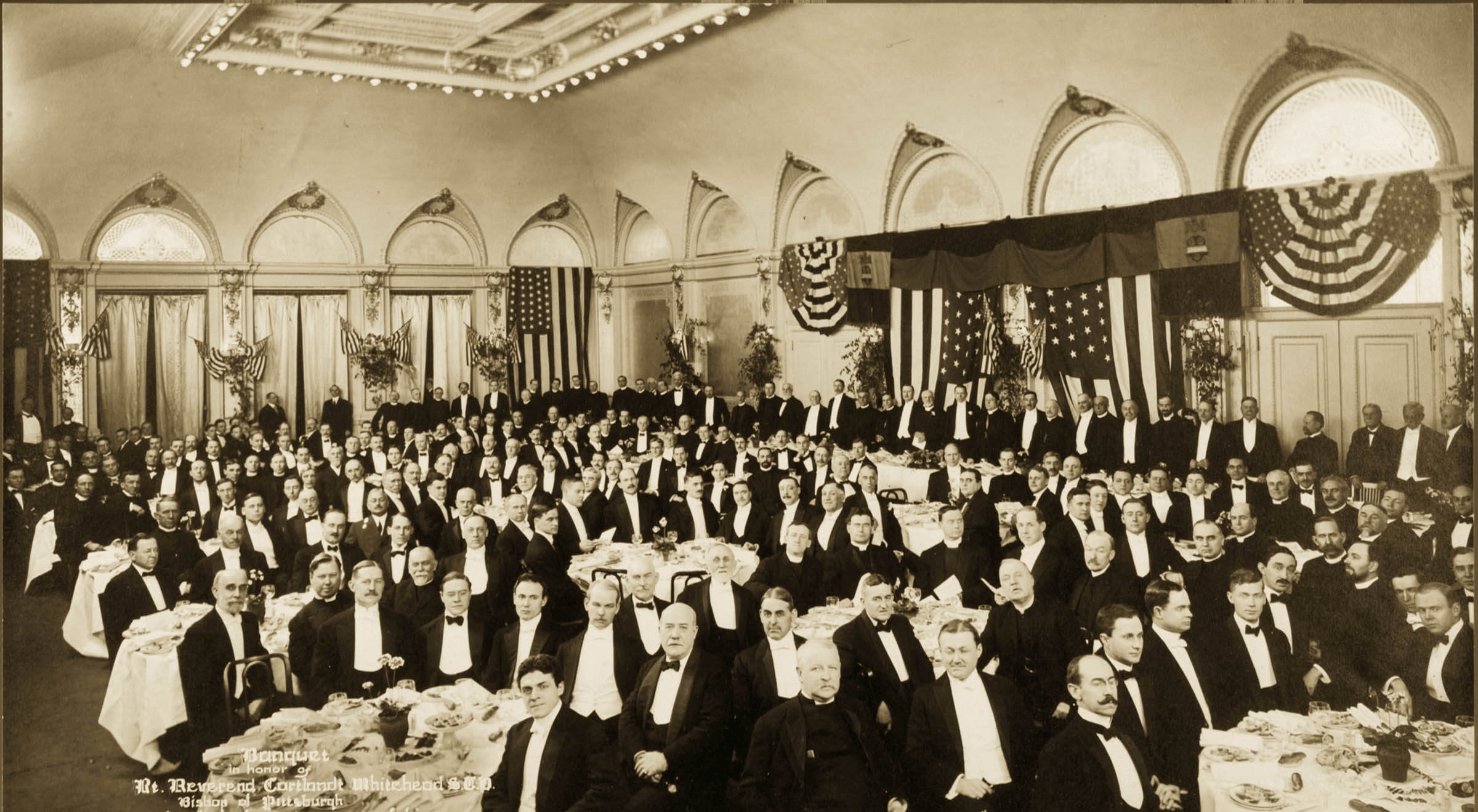