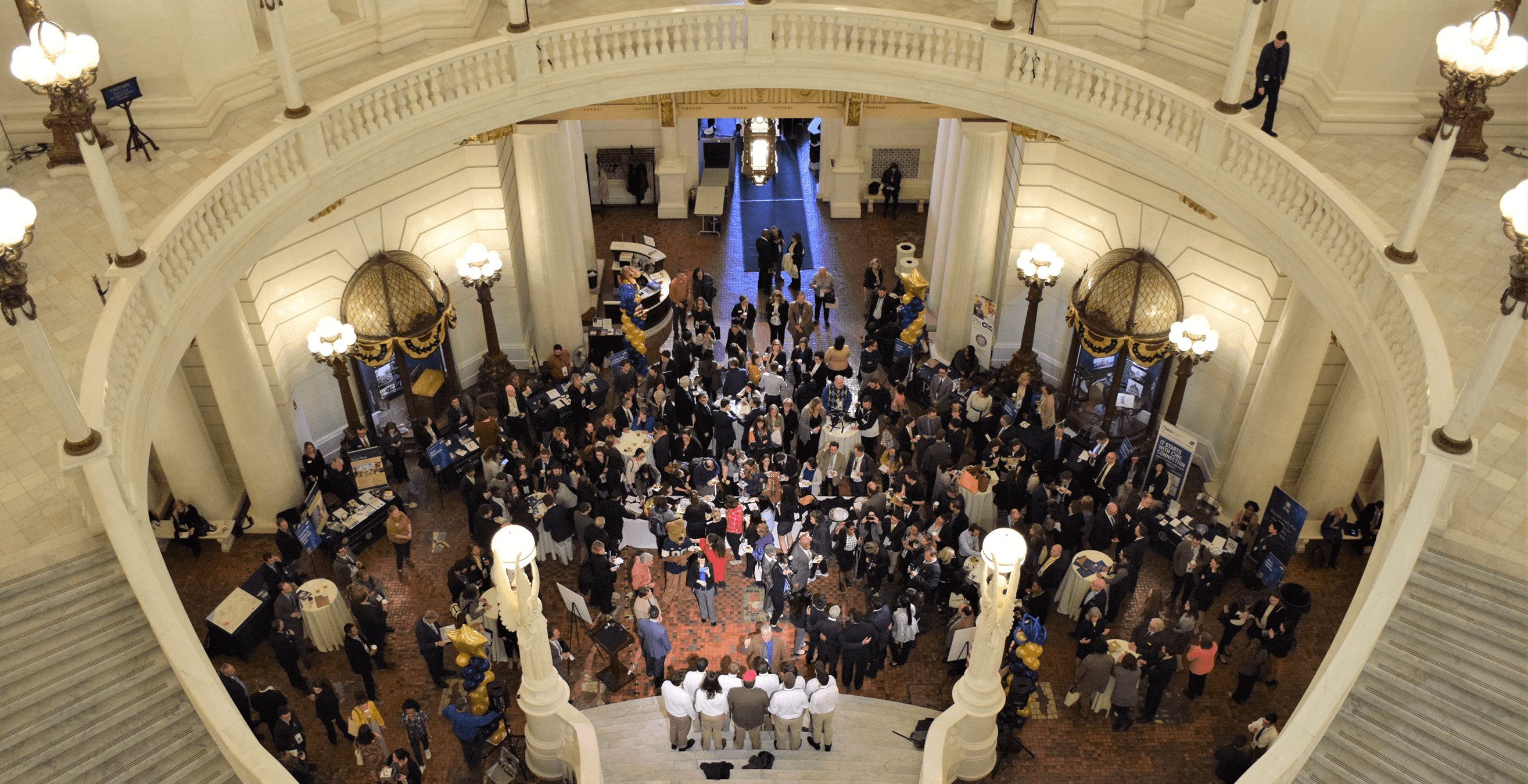 Bhavini Patel was a little nervous, but ready. Above her, the Pennsylvania Capitol building’s majestic dome rose high above the ornately appointed rotunda. Patel had on a business suit and her Pitt pin, which gleamed on her lapel. As a first-generation college graduate, a former candidate for Allegheny County Council, and now the owner of a technology company, she has an incredible story to share about how Pitt transformed her life. And that’s just what she was there to do.

It was 2019 and Pitt Day in Harrisburg, the University’s annual pilgrimage to the Pennsylvania Capitol. There were students, administrators, poster displays of programs and classes, speeches, blue and gold balloons everywhere, and even ROC, the mascot, sporting a Pitt jersey. Groups from all the University campuses were gathered on a mission.

They were going to meet with state legislators to share all the ways in which state funding empowers the University to impact and enrich lives and society in not only southwestern Pennsylvania and the commonwealth but also across the globe. 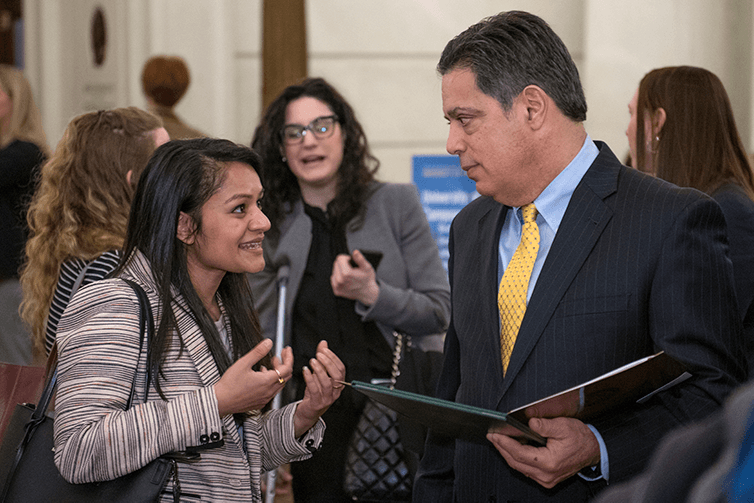 Two years later, Patel (A&S ’16) remains an outspoken champion of Pitt and the power of education. She’s proud to be a member of Pitt Advocates, a diverse group of 10,000 students, faculty, staff, alumni and friends knitted together to cheer for the University. Together, at Pitt Day in Harrisburg and other events, they share their stories with elected officials to show the real-world impact of higher education.

A key goal is to help build support among lawmakers for reliable and adequate state funding for Pitt—funding that is key to continuing the University’s work transforming lives through education, research, employment, and more. Securing funding is more important than ever, as budget stagnation and cuts continue to threaten educational institutions across the country.

This is a matter that resonates for Patel. The daughter of first-generation immigrants from India, her mother operated a food truck near the Oakland campus. As a young girl, Patel helped her mother serve meals in the shadow of the Cathedral. The campus beckoned Patel, and she determined she would one day be a Pitt student.

Sure enough, after high school graduation, she enrolled at the University of Pittsburgh. On campus, the Honors College student dove into a life-changing four years. Pitt scholarships twice supported her study abroad in Tanzania, East Africa, where she examined health care access for local artisans and merchants. She earned a Bachelor of Philosophy after taking on a triple major in international and area studies, sociology, and Africana studies. She was a finalist for the prestigious Rhodes Scholarship and later studied at University of Oxford in England thanks to a Rotary Global Grant.

Since leaving campus, influenced by the political process she witnessed on her advocacy trips to Harrisburg, Bhavini recently won her primary for Edgewood Borough Council and has created her own civic tech company, beamdata, which works to keep citizens connected to state legislators to address social justice and inequality. She also serves on the University’s Master of Quantitative Economics Advisory Board and was nominated to serve on the PAA Board of Directors as a Director-at-Large. 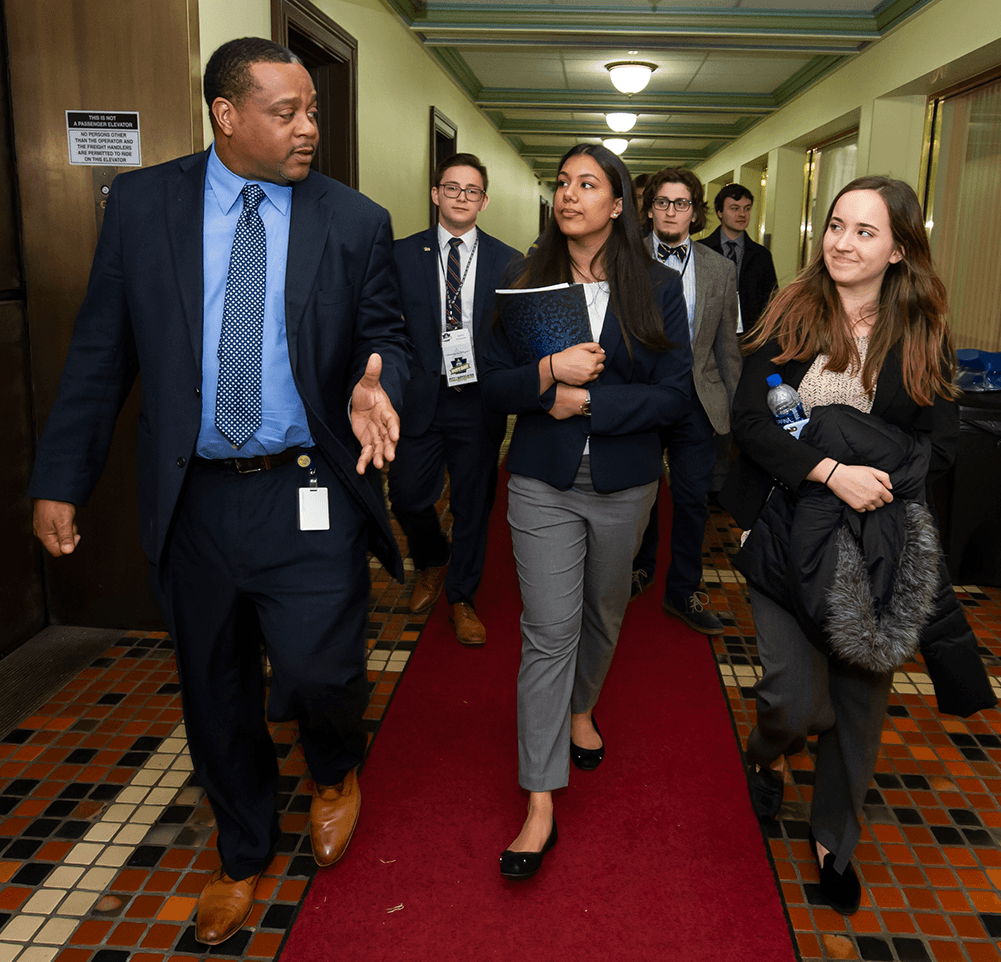 “I’m incredibly proud to be a Pitt grad,” she says. “I mention that at every opportunity I get because I got a lot of support from my advisers to do what I was able to do. I think that it’s important to show that the institution is welcoming and that there are people at Pitt who are really invested in students on campus and when they leave.”

As a Pitt Advocate, Patel feels a drive to remind legislators of the thousands like her who have benefited from state support to the University and who are engaged in transforming lives communities across the commonwealth.

Pitt Advocates also encourage voter registration; ask alumni to stay attuned to events and legislation unfolding in Harrisburg, and issue advocacy alerts, directly informing legislators of what issues matter to them and the success of the University.

Working in tandem with Pitt Advocates is the University’s Community and Governmental Relations office, one of the sponsors of Pitt Day Harrisburg. Throughout the year, the Government Relations team visits elected officials at the capitol and in their home districts to share stories about the impact Pitt students are making, the breakthroughs happening in Pitt labs and the ways Pitt supports business and communities across the state.

“But there’s nothing quite like a legislator hearing directly from faculty, students, staff members, parents and alumni who live in their district,” says Paul Supowitz, vice chancellor for community and governmental relations.

“Every year, our lawmakers in Harrisburg tell us about conversations they’ve had and how much they’ve learned from them.”

That’s why Patel, and others like her, will keep bringing their voices to the table.

Because of Pitt and the support it receives from the state, Patel says, “I was able to experience things I never imagined possible.”

The only thing that could make it better? Ensuring that future Pitt students enjoy those same opportunities.